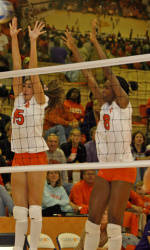 CLEMSON, SC – Danielle Hepburn will look to set the school block assist record this weekend as the Clemson volleyball team heads to Columbia, SC to take on a trio of in-state teams. The Tigers will participate in the Carolina Challenge from Sept. 12-13 at the Volleyball Competition Facility on the campus of the University of South Carolina. Clemson’s match against the Gamecocks (5-1) on Friday night at 7:00 pm will be the highlight of the tournament and will be televised on South Carolina ETV. The Tigers will face Winthrop (3-3) at 12:30 pm on Friday and conclude the event on Saturday against the College of Charleston (4-2) in a 12:30 pm contest.

Hepburn needs just two block assists to tie Cindy Stern’s record of 448 over a career. The senior middle is averaging 1.45 block assists per set and could hit the mark against the Eagles on Fiday afternoon. Hepburn has also posted 69 kills in 2008 to rank second on the team behind Lia Proctor’s 79. Meanwhile, Didem Ege leads Clemson with 87 defensive saves and setter Kelsey Murphy has tallied 204 assists in the Tigers’ six matches. She has guided the Clemson offense to a .229 hitting percentage with 34 more kills than the opposition. Defensively, the Tigers are holding teams to a mere .140 hitting clip and have posted 66 team blocks for a 3.30 per set average.

Scouting The Opposition The Tigers will face a 3-3 Winthrop team that is coming off a 1-2 record in the Hilton Garden Inn Winthrop Volleyball Classic on Sept. 5-6. Shannon Sitzmann leads the Eagle offense with 72 kills and a .353 hitting percentage, while Janice Rivera has recorded 84 defensive saves thus far in 2008. Winthrop is hitting just .181 as a team and has recorded only 37 team blocks in 2008.

South Carolina enters the weekend with a 5-1 record, having most recently won the Art Carmichael Classic in Kingston, RI. A trio of hitters are separated by just nine kills indicating a balanced offense for the Gamecocks. Ivana Kujundzic leads the squad with 75 kills, while Belita Salters and Megan Laughlin have totaled 68 and 66, respectively. Overall, South Carolina is hitting a .246 percentage for the year with a 12.91 kills per set average.

The College of Charleston owns a 4-2 record through the first two weekends of the 2008 season. Emily Sawin has totaled a team-best 59 kills for the Cougars with Whitney Russell holding the edge in kills per set with a 3.17 average. Setter Cole Dawley has been spreading out the offense while tallying 211 assists and Emily Shelton has recorded 95 digs in the Cougars’ 21 sets.

Clemson Against The Field The three teams in the Carolina Challenge are quite the familiar foes for Clemson. The Tigers have played over 100 combined matches against the Cougars, Gamecocks and Eagles, but only own a winning record against Winthrop. Clemson won the last meeting with the Eagles, a 3-2 victory in 2004, to improve to 18-13. The Tigers and the College of Charleston matched up most recently during the 2003 season, when the Cougars won a 3-2 decision at Jervey Gym for their 14th win in 23 tries over Clemson. South Carolina widened its lead to 32-20 all-time against the Tigers with a five-set victory in 2006. The in-state rivals did not play during the 2007 season.

Veterans Against The Field Five Clemson players have seen action against the Gamecocks, but no current player was in college for the last meetings with Winthrop or the College of Charleston. Danielle Hepburn have played in two matches against South Carolina with a 1-1 record. Abbott has totaled 29 kills in eight sets, while Hepburn owns a .576 hitting percentage against the Gamecocks with 21 kills in 33 attempts with just two errors. She has also posted seven total blocks in the two matches.

In the five-set thriller in 2006, then-freshmen Lia Proctor’s were playing in just the fourth match of their collegiate careers. Ege totaled 14 digs while Proctor posted 16 kills. Murphy tallied 27 assists with eight block assists for nine total blocks, both blocking statistics are still personal bests for the three-year starter.