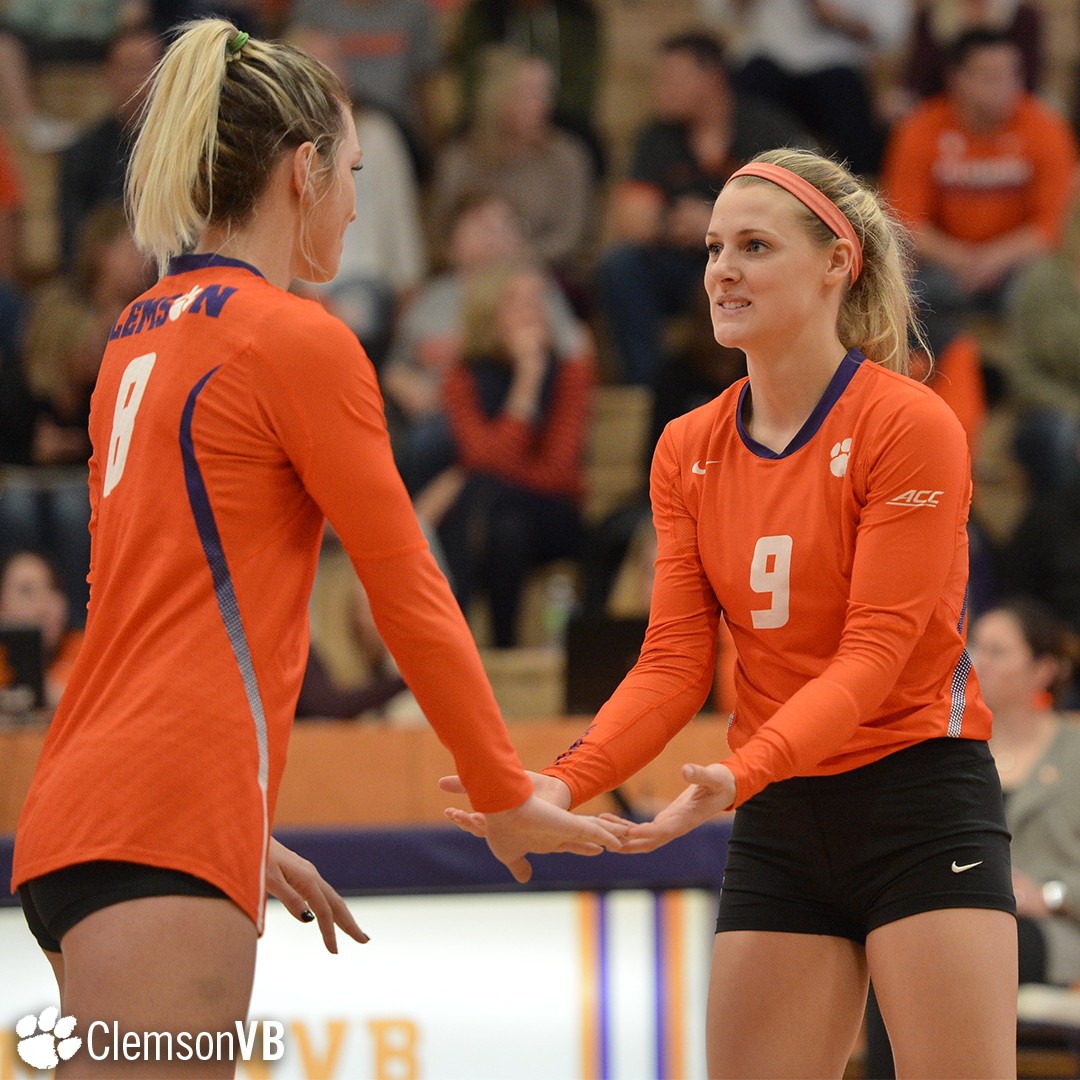 CLEMSON, S.C. – Seniors Keely Hayes and Kennedy Wilson-Talmadge shined in the final match of their career in a Clemson uniform as the Tigers fell to Miami (25-23, 19-25, 26-28, 15-25) Friday afternoon in Jervey Gym. Hayes tallied 29 assists, six digs and 2.0 blocks, while Wilson-Talmadge added six digs and a service ace as a defensive specialist. Sophomore outside hitter Kaylin Korte notched her fifth double-double of the season, posting 16 kills on a season-high 49 swings and 10 digs.

The Tigers came out swinging to open the first, grabbing an early 10-6 lead before surrendering five straight points to give the Hurricanes a one-point advantage. The two teams were neck-and-neck deep into the third as a Korte kill on a pass from Hayes tied the set at 22-22. The Tigers went on to take three of the next four points to win the first, including the final play that saw another kill from Korte on pass from Hayes.

Clemson carried momentum into the second, again taking a 10-6 lead. Miami would once again go on a run to take the lead, this time 6-0, giving the Hurricanes a 12-10 advantage midway through the second. With the score 14-12 in favor of Miami, the Hurricanes strung together a 6-1 run, which proved to be the difference, going on to take the set, 25-19, and tie the match 1-1 entering the break.

Coming out of the break, the two teams were tied early on (6-6) before Clemson posted seven unanswered points, giving the Tigers a 13-7 lead. The Hurricanes quickly made an unanswered run of their own, cutting the Miami deficit to one. A Miami service error later in the set would tie the match at 23-23. After trading four straight points, the Tigers took a 26-25 lead on another Hurricane service error. Back-to-back Tiger hitting errors followed by a Miami kill would seal the set, 28-26, in favor of the Hurricanes, giving them a 2-1 lead after winning the third set, which saw 14 tie scores and five lead changes.

S3 | With her fourth dig of the match, Kennedy Wilson-Talmadge notches her 400th career dig on Senior Day! #Clemson🏐 pic.twitter.com/9sBASkdAxq

The Tigers could not regain momentum early in the fourth as Miami jumped out to an early 7-0. Clemson would cut the deficit to two points, 13-11, midway through the fourth, but another unanswered run (6-0) by Miami was too much to overcome as the Hurricanes went on to take the set (25-15) and match.

Hayes, a transfer from the University of Louisiana at Lafayette, closes out her career with 1,442 career assists, 1,119 of which came as a Tiger in 62 matches and 200 sets played from 2016-17. Wilson-Talmadge ends her career after joining the team in 2015. The Orlando, Fla., native tallied her 400th dig in the third set against the Hurricanes today, ending her career 402 total digs. Wilson-Talmadge competed in 63 matches and 201 sets played.