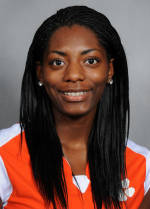 Danielle Hepburn led the Tigers with 16 kills and a .378 hitting percentage on the night. Jeannette Abbott also added 13 kills for the Clemson squad.

Felicia Willoughby led the Virginia Tech offense with 14 kills and a .375 hitting figure, while Kristen Cunningham and Betsy Horowitz posted double figures in kills as well.

In the first set, the Tigers jumped out to a 5-0 lead behind three consecutive kills from Hepburn. Virginia Tech pulled to within 16-12 on a kill by Taylor Parrish, but Clemson responded with three quick points to take a 19-12 lead. The Tigers eventually stretched the lead to 21-13 before taking the first set 25-18 on a block by Murphy. Clemson hit at a .353 clip, notching 13 kills against only one error, while holding the Hokies to a .179 mark. Hepburn added five kills in the set in ten chances, and Murphy notched 10 assists, two digs, two kills, and a block.

In set two, the Tigers raced out to a 9-5 lead. At 16-14, Clemson went on what looked like a decisive 7-1 run to take a 23-15 lead. Up to this point, the Tigers had committed only one attack error in the entire match.

However, the Hokies didn’t quit, taking set two with a 10-0 run to close the game at 25-23, fueled by seven Tiger errors.

Clemson will head to Charlottesville on Saturday for a second-straight ACC battle. The Tigers and Cavaliers are slated for a 7:00 pm start at Memorial Gym on the campus of the University of Virginia.