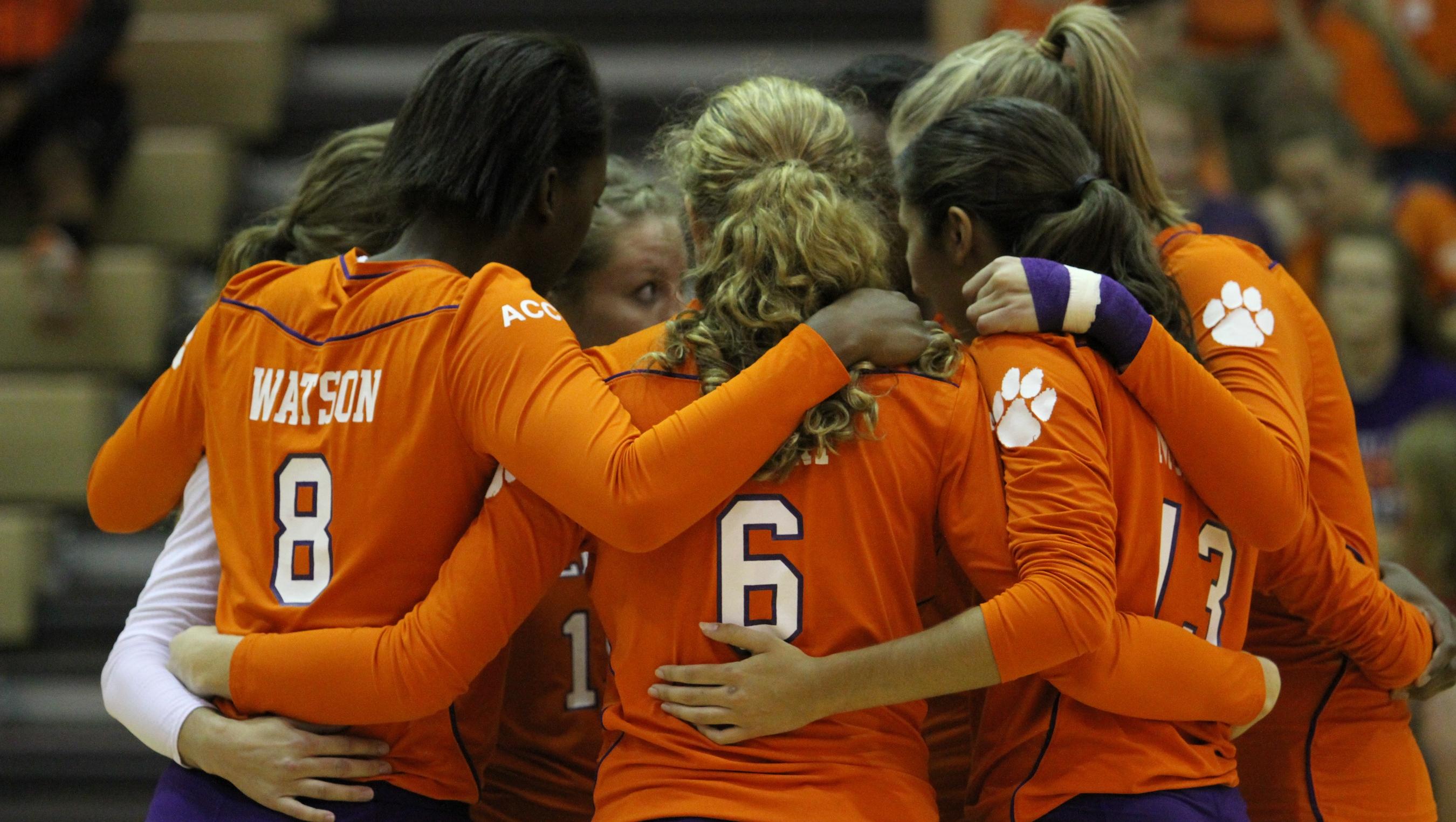 ATLANTA, GA – The Clemson volleyball team  fell to Georgia State, 3-1 (25-22, 17-25, 19-25, 23-25) on Thursday night at the Georgia State Sports Arena in Atlanta. Clemson (4-3) had a 13-match winning streak over the Panthers (4-4) snapped. The Tigers will bounce back to take on UCF (6-1)on Friday at noon, also at the Sports Arena.  Mo Simmons led Clemson with 21 kills, her third match in the last four outings with 20-plus kills, but hit just .180 on the evening. Freshman Leah Perri had nine kills and junior middles Karis Watson and Beta Dumancic had eight kills apiece.  Reigning ACC Player of the Week Hannah Brenner had 41 assists and 12 digs for her third double-double of the season and 35th of her career. However, Clemson hit just . 146 as a team and hit into 13.5 Panther blocks.  Defensively, Kristin Faust had a season-high 22 digs, while Sydney Moseley had 11 and Niki Collier had 12. The Tigers did struggle to pass for much of the night, as they allowed a season-high nine aces in the match.  The Pather attack was balanced, as three players finished with 12 or more kills as they hit .242 for the match.  Clemson took the first set, 25-22, after erasing an early 10-6 Panther lead behind Simmons. Trailing, 14-12, Clemson surged ahead for a 19-17 lead to force a Georgia State timeout. The Panthers responded with three straight kills and a 20-19 lead, forcing a Clemson timeout. The Tigers seized control with four straight points behind two kills and two GSU attack errors. The teams sided out the rest of the way as Clemson held on for the 25-22 win.  In the second set, it was Clemson who ran out to a 10-6 lead, before the Panthers went on a 16-4 run to take a 22-14 lead. The teams traded six straight side outs as the Panthers evened the match with a 25-17 win, in which they hit .400 and had just five total team digs in the set, but had 5.5 blocks and four aces.  Clemson opened up a 13-10 lead in the third set in jockeying for control of the match. Ahead 14-11, Georgia State scored six of the next seven points behind a pair of blocks to take the 17-15 lead. A pair of late aces propelled the Panthers to the 25-21 win in the set and a 2-1 lead in the match.  The final set was hotly contested, with Georgia State seemingly in control at 20-16. However, Clemson battled back to tie the match at 21-21 on a Kristin Faust ace down the line. A sideout from GSU and an attack error form Simmons left the Panthers with a 23-21 lead, and the teams traded sideouts. A difficult set to Dumancic on match point sailed just over the junior’s reach, ending the match and halting Clemson’s streak in the series.  The Tigers fell to 13-3 all-time against Georgia State, although they had not lost since the 1978 season.  After playing UCF on Friday, Clemson will take on Alabama, Troy and Delaware in the Clemson Classic in Jervey Gym on Sept. 20-21.