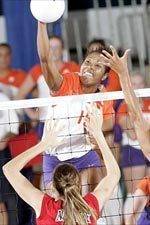 Lori Ashton was a bright spot for the Clemson offense, totaling 20 kills and a .486 hitting percentage. Ashton also contributed six blocks. Fellow senior Leslie Finn had 15 kills and now needs 23 kills to overtake Robin Kibben for first place on Clemson’s career kills list. Meghan Steiner played just two games, but was instant offense for the Tigers. She hit a career-best .438 with eight kills. On defense, Finn had 22 digs and Anna Vallinch had 20 to pace the team.

Wake Forest was led by Kim Stern, who turned in an incredible performance. She led the Demon Deacons with 18 kills and had nine total blocks (including three solo). Setter Erin Borhart had a triple-double with 53 assists, 17 digs, and 12 kills. Borhart hit .321 for the match.

In the first game, Wake Forest scored three of the last four points to pull out a tight, 30-28 win. The Demon Deacons also took game two, thanks to eight straight points that helped build a 24-14 lead.

The Tigers battled back in the third game to get its only win of the night, a 30-22 victory. In the fourth, the Demon Deacons put together a string of seven consecutive points to take a 21-13 lead that it would not surrender.

The Tigers conclude the home season on Saturday with a 6:00 PM match against Duke. The match will honor 2004 seniors Lori Ashton, Leslie Finn, Sarah Gardner, and Stephanie Haskell.