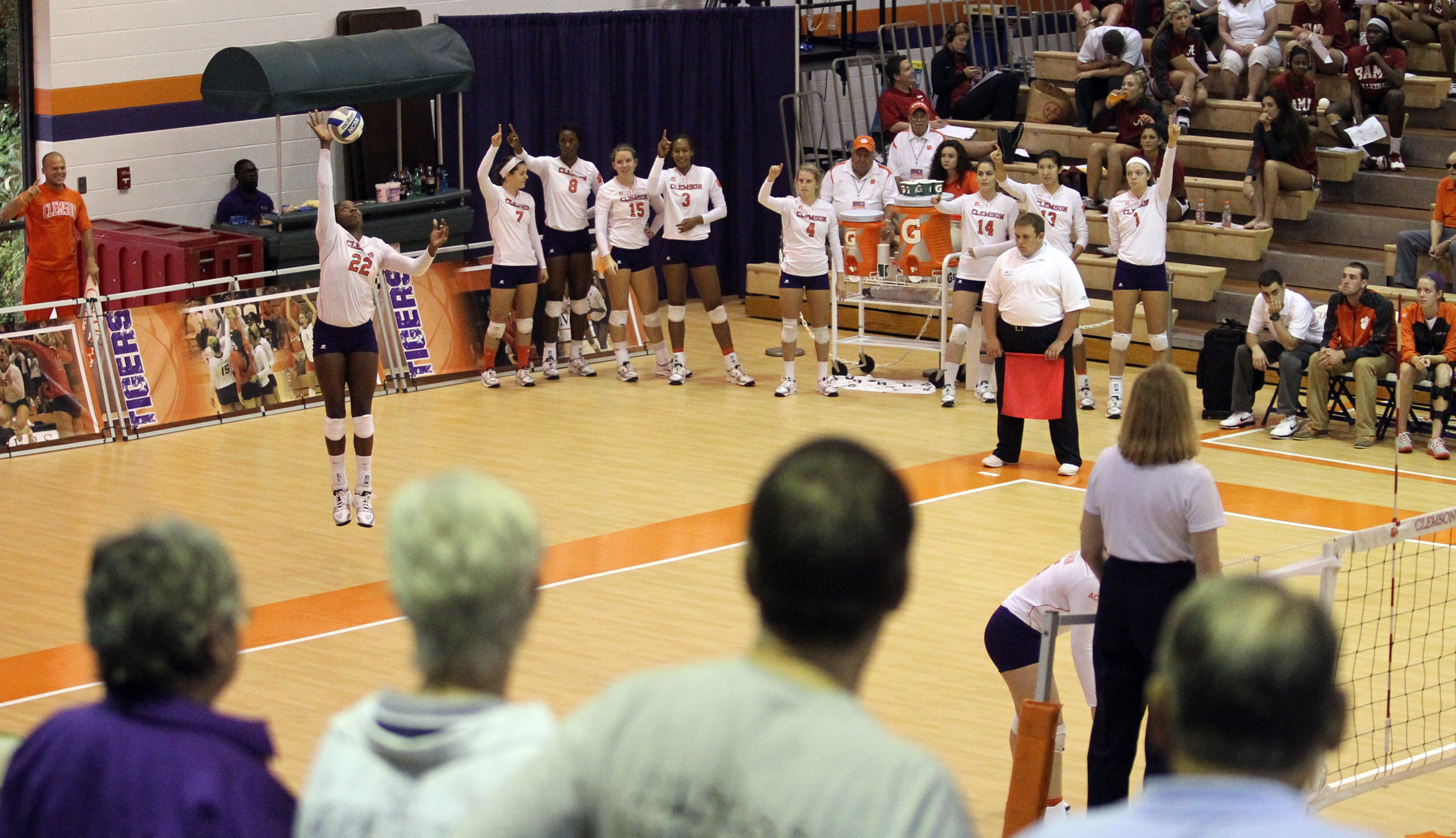 COLLEGE PARK, MD – The Clemson volleyball team shook off a first set defeat and reeled off three in a row to take down Maryland, 3-1 (19-25, 25-22, 28-26, 25-16) at the Comcast Pavilion on Sunday. The Tigers (7-6, 1-1 ACC) took down Maryland (9-5, 1-1 ACC) in College Park for the seventh straight time, and in their final meeting as conference foes.  “I am really pleased with how the team responded coming back after Friday night,” said Head Coach Jolene Hoover. “It’s a great road ACC victory in a tough league. Our outsides carried a majority of the load tonight, and we passed really well as a team.” Indeed, Clemson’s two main outside combined for 108 of Clemson’s 166 attacks. Mo Simmons went for 22 kills and 17 digs for the Tigers, who got up a season-high 82 digs as a team and had 14.0 team blocks. Kristin Faust, who played outside for the second straight match, had 12 kills in a season-high 40 swings, and added 19 digs.  Defensively, Clemson held Maryland to just .123 hitting, despite 18 kills from the Terps’ Emily Fraik. Niki Collier, playing at libero, chipped in with a career-high 16 digs, while setter Hannah Brenner had 39 assists, 14 digs, five kills, and four blocks. Beta Dumancic had nine total blocks, and Alex Lynch added five in her first significant playing time. Leah Perri, who had eight kills, was also in on five blocks.  Simmons’ double-double was the sixth of the season for the senior and the 21st of her career. Brenner had her 36th career double-double, and Faust her 12th.  Maryland got ahead, 16-9 in the first set and the Tigers weren’t able to dig out of that hole, despite pulling within two at 19-17. The Terrapins had six blocks in the set, and Clemson hit just .042.  In the second set, the Tigers fell behind, 16-13, before Hoover called a timeout. Her message was received loud and clear, as Clemson reeled off six straight points to take a 20-17 lead. Maryland pulled within one at 21-20, but back-to-back kills from Perri and Faust ended the run as Clemson went on to even up the match, 1-1.  The Tigers took an 8-3 lead in the third set behind three early blocks from Dumancic, but out of a timeout, Maryland hit for six in a row. Late in the set, with the teams tied at 17-17, Clemson scored four in a row, and looked to be in control, but the Terps battled back to take a 24-23 lead and grab set point. The Tigers went to Perri for a kill, and then the frosh got in on two straight blocks. Dumancic closed the set with a solo block as Clemson won, 28-26.  In the fourth set, Clemson used a 9-1 run to turn a 12-11 deficit into a 20-13 lead. Simmons had three kills during the run. The teams traded side outs, but Clemson was able to put the Terps away, 25-16.  Clemson will now open up a six-match conference homestand, beginning with Miami and Florida State on Friday and Saturday in Jervey Gym. Friday night’s match will be on ESPN3.