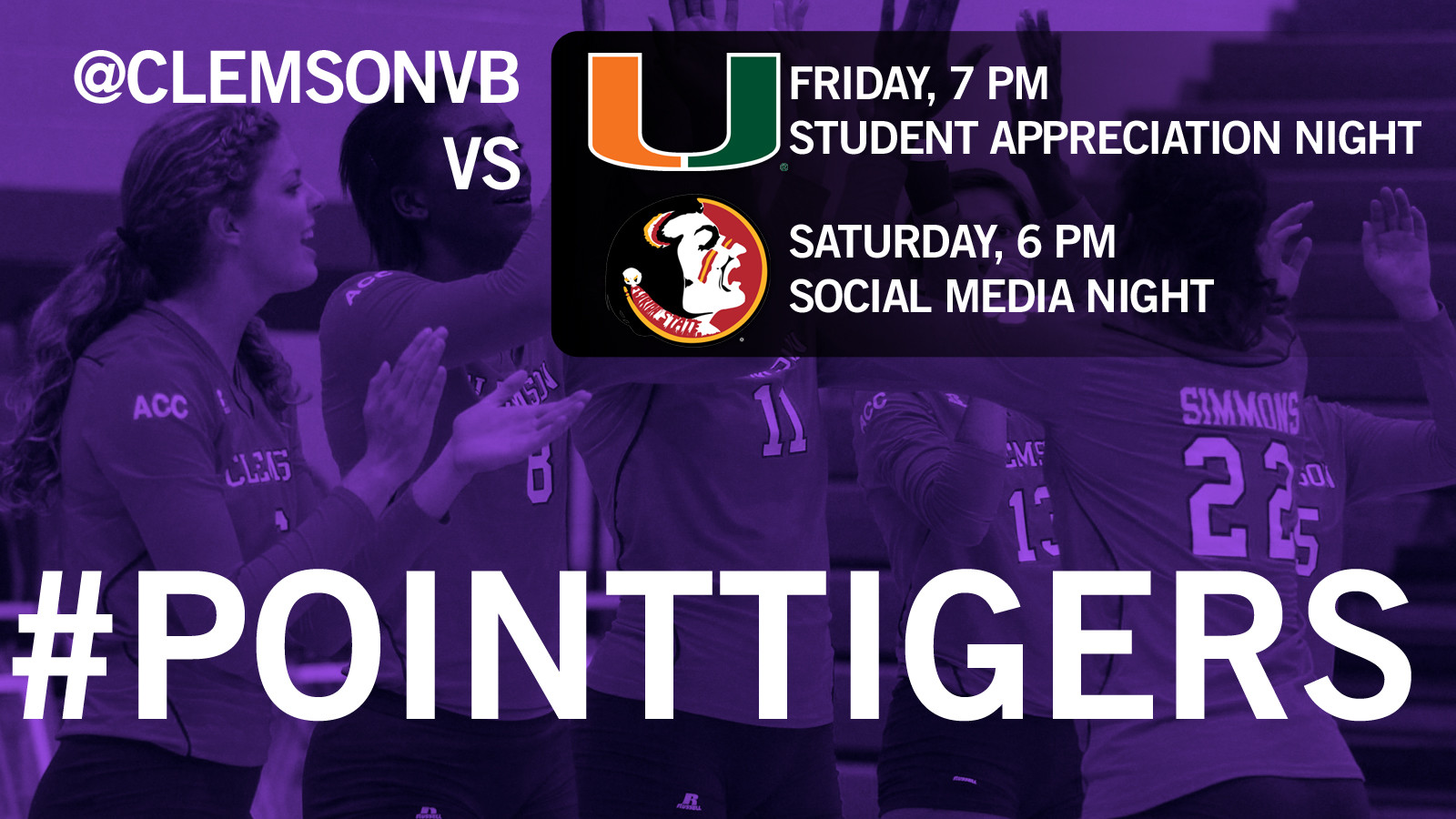 CLEMSON, SC – The Clemson volleyball team will take on Miami (9-3, 2-0 ACC) and No. 18 Florida State (9-4, 2-0 ACC) this week in Jervey Gym. The Tigers (7-6, 1-1 ACC) will play the Hurricanes Friday at 7:00 pm on ESPN3, and the Seminoles at 6:00 pm on Saturday on TigerCast. These two matches will open the first six-match ACC homestand in school history.  Admission and parking at both events are free. Follow @ClemsonVB on Twitter and Instagram for some updates throughout the match.  Clemson is looking for its first win against a ranked team in the Seminoles, who have won eight in a row in the series with the Tigers. Clemson fell to both Miami and Florida State on the road last season. However, Miami’s last trip to Clemson in 2011, the Tigers took down the 22nd-ranked Hurricanes in five sets.  After playing this weekend, the Tigers will play Georgia Tech next Wednesday and Notre Dame next Friday, all in Jervey.  Promotions Schedule Friday: Student Appreciation Night

Notes (in 140 characters or less): Mo Simmons (@Mo_Money22) leads @ACCVolleyball and is 13th in the nation at 4.52 kills/set Simmons is trying to be 1st Tiger to lead ACC in kills since Jeannette Abbott in 2006, when she averaged 4.40 per set Beta Dumancic ranks 3rd in the ACC at 1.35 blocks per set; She has tallied five or more blocks 8 times this season Kristin Faust has split time at hitter and libero this year. Most recently, she went for 12 kills, 19 digs at OH Freshman Leah Perri is quietly averaging 2.15 kills, 0.75 blks per set and hitting .266 at RS Perri has nine or more kills in eight matches DS Niki Collier is 232/237 (.979) in serve-receive this season and is 3rd with 125 digs on the season Collier played libero in each of the last two matches, tallying car. high 16 digs, 4 ast v. MD Hannah Brenner ranks 6th in Clemson history with 3,189 career set assists; also has 36 car. double-doubles #rejected Clemson’s 2.52 blocks/set average is good for 5th in the ACC Alex Lynch made her first career start against Maryland, and had 1 kill and 5 blocks in the four-set match