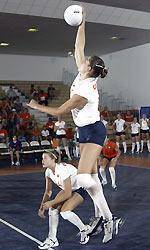 Clemson volleyball will play host to a pair of conference foes this weekend as the Tigers begin ACC play. Clemson and N.C. State meet Friday night at 7:00 PM, while the Tiger and Tar Heels play Saturday at 6:00 PM. Admission to both matches is free.

Clemson has been led all year long by the play of senior captain Leslie Finn. She is second in the ACC with an average of 5.05 kills per game. She has 192 kills and needs just nine more to pass assistant coach Jodi Steffes for fifth-place on the Tigers’ all-time list. Defensively, Anna Vallinch has been solid with 170 digs and a 4.36 per game mark. She set a Jervey Gym record versus Georgia when she had 34 digs in the match.

N.C. State comes into Friday’s match with Clemson boasting a 10-3 record under fourth-year head coach Mary Byrne. The Wolfpack defeated North Carolina A&T 3-0 Tuesday evening, and Friday’s matchup with Clemson will also be their conference opener. The Wolfpack defense has an incredible 160.0 team blocks, while opponents have been limited to just 61.0. Leading the way for N.C. State is Adeola Kosoko and Stefani Eddins, who are 1-2 on the team in terms of hitting percentage and blocks.

North Carolina is under the direction of Joe Sagula, who won his 500th career match as a head coach Wednesday when the Tar Heels opened ACC play with a victory over Duke. The Tar Heels evened their record at 6-6, and play at Georgia Tech on Friday before coming to Clemson on Saturday. Leading the Tar Heel squad this season has been Molly Pyles, who has a total of 169 kills and 146 digs.