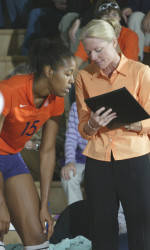 Clemson volleyball announced its 2005 spring schedule on Wednesday. The Tigers, who began spring practices last week, will compete in three events in the month of April. Clemson was 20-14 last season and returns eight letterwinners from the team.

The Tigers’ first competition of spring is on April 2, when Clemson will play in the Southern Methodist Tournament held at Dallas, TX. A total of nine teams will be participating in the tournament (Clemson, SMU, Baylor, Oklahoma, Texas Tech, Texas State, TCU, Abilene Christian, and either Rice or North Texas). Clemson’s other two dates are in Jervey Gym, with a match against Georgia on April 5 at 5:30 PM and a match April 14 versus Furman at 5:00 PM.

Clemson will be without the services of departed seniors Leslie Finn, the school’s all-time leader in kills and an AVCA Honorable Mention All-American in 2004, and Lori Ashton, a two-time All-Region performer.

The Tigers do return Brittany Ross, who was an ACC All-Freshman selection in 2004 as an outside hitter. She set a school freshman record with 472 kills, including a career-best 25 in the Tigers’ upset win over Georgia Tech in the ACC Tournament last fall.

The Tigers also return libero Anna Vallinch, who established a school record with 620 digs (5.04 per game). Clemson also returns its starting setter, Courtney Lawrence, who had a team-best 864 assists last season as a freshman. Sue Eckman is also a returning starter at the defensive specialist position, as she posted 215 digs and 37 service aces in her first year with the program. Leslie Mansfield returns as a versatile sophomore performer. She totaled 95 kills, 69 set assists, 44 service aces, 271 digs, and 62 total blocks.