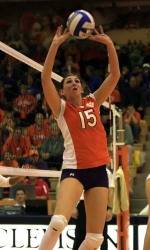 CLEMSON, SC – Clemson Head Volleyball Coach Jolene Jordan Hoover has announced her team’s 2009 spring schedule. The Tigers will remain in South Carolina for all three dates while a home tournament on Apr. 11 highlights the schedule.

Clemson will kick off the spring at the College of Charleston Tournament on Saturday, Mar. 28. In addition to the Tigers and Cougars, North Carolina, Charlotte, Coastal Carolina, Charleston Southern, Winthrop and the Savannah College of Art and Design will participate in the event.

The College of Charleston will make the trip to Jervey Gym for the Clemson Tournament on Apr. 11. The Tigers will also play host to Georgia in the three-team event.

Clemson will wrap up the spring season on Apr. 15 as the Tigers travel to Greenville, SC for a date with the Furman Paladins.

Hoover returns five starters, including libero Didem Ege, from a 2008 squad that posted a 23-9 record and advanced to the second round of the NCAA Tournament. Juniors Lia Proctor earned first-team All-ACC accolades in 2008 and have been three-year starters at the setter and outside hitter positions, respectively. Cansu Ozdemir, a sophomore from Istanbul, Turkey, and freshman Brittany Fennell will also be back on the court this spring.

Four other players who earned their first letters last fall – Lacy Hayes, Lisa Jedlicka, Morgann Mitchell and Katie Sharpe – will also return. Hoover will gain the services of freshman hitter Brooke Kohler, who was injured for the 2008 season, and Jessica Williams, a right-side hitter who sat out last fall after transferring from NC State.

Although the Tigers lost just two seniors, they will be difficult to replace. Jeannette Abbott and Danielle Hepburn were four-year starters for Hoover whose names and statistics are splattered across the Clemson record books. Hepburn was just the program’s second player to be named to an All-America team, earning third-team honors, and was the 2008 ACC Player-of-the-Year.