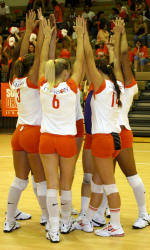 Clemson will play host to Winthrop on Thursday, Mar. 8 at 6:00 pm and will welcome SEC rival Georgia to Jervey Gym on Tuesday, Apr. 3 for a 6:30 pm match. The Tigers will then play at the University of Illinois-Chicago on Thursday, Apr. 12 before taking part in the Sports Performance Volleyball club’s annual spring tournament on Apr. 14 in Aurora, IL.

Hoover returns sophomores Jeannette Abbott and Danielle Hepburn, who accumulated an impressive list of post-season awards, while setting single-season and career records in just their second years at Clemson. The pair became just the third and fourth All-Americans in program history after being named Honorable Mention by the American Volleyball Coaches Association. Both were also named to the first-team AVCA All-Region and were first-team All-ACC selections.

Meanwhile, Didem Ege and Kelsey Murphy made an impact in just their first seasons at Clemson. Ege set freshman records for digs in a single match (36) and in a single season (544), while earning second-team all-conference honors and a selection to the ACC All-Freshman team. Murphy was also named a freshman All-ACC after recording 1116 assists on the year with a 12.07 assist per conference game average that ranked third in the league.

Also back for the Tigers are juniors Sue Eckman, Courtney Lawrence, Leslie Mansfield and Meghan Steiner, while sophomores Katie Bridges and Laura Boozer and freshmen Lia Proctor and Hillary Douglas return as well.

Clemson will be playing without the services of departing seniors Anna Vallinch, the school record holder for digs per game, and back-up setter Dawn Robertson.