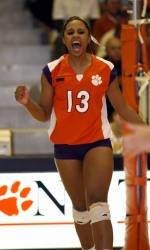 Clemson clinched the ACC title and an automatic bid on Wednesday with a victory over Maryland. The selection show will air at 8:00 pm on Sunday night on ESPNU, with first and second round action being held on campus sites next weekend.

“This was a good weekend for us, winning the ACC title outright on Wednesday night and being able to finish against a good defensive team in Boston College on the road today,” Tiger Head Coach Jolene Jordan Hoover said.

Friday’s win was Clemson’s 20th sweep of the season and its 11th victory on the opponents’ home court. The 11 road wins rank second in program history, while the 20 three-game victories tie for third-most all-time.

“I’m impressed with how well we’ve performed on the road this season. We have a grueling schedule and this team never let up,” said Hoover.

Hepburn was one of four Tiger hitters in double figures, along with Jeannette Abbott (12), Leslie Mansfield (10) and Lia Proctor (10). Clemson’s setter Didem Ege led the team defensively with 20 digs.

Kelsey Johnson posted a team-high 11 kills for Boston College, who finished its season at 14-18 overall and 8-14 in conference play.

Game one went to Clemson, 30-16. The Tigers hit a remarkable .537, recording 23 kills to only one error on 41 attempts. Four Tigers recorded more than four kills in the game, with sophomore setter Leslie Mansfield and junior hitter Lia Proctor added six kills apiece in the game.

Clemson took a 2-0 lead, winning 30-24 in the closest game of the match. Ahead 17-16, the Tigers scored three straight points for a cushion they held the remainder of the set. A block by Hepburn and Mansfield put their team up, 26-20, and Clemson went on to claim the game.

A pair of seven-point runs by the Tigers in the third game helped them post the 30-23 win. The first came on the service of Sue Eckman, who had four aces in the match, and gave Clemson the early 8-2 advantage. After the Eagles fought back to within two, the Tigers again rallied, this time with Abbott serving, to go ahead 25-18. Proctor then recorded the final point of the afternoon with a kill.