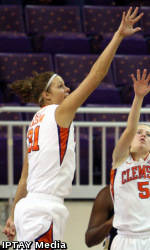 CHARLOTTESVILLE, VA – Virginia forced a season-high 29 Clemson turnovers on Sunday in a 68-36 win at John Paul Jones Arena in Charlottesville, VA. Freshman Nikki Dixon had 14 points to lead Clemson (6-17, 2-10 ACC), while Quinyotta Pettaway added ten against the Cavaliers (18-8, 6-6 ACC), who defeated the Lady Tigers for the second time this season.

Chelsea Lindsay tied a season-high with seven rebounds, and also added seven points in the game, while Lindsay Mason had a season-high six blocked shots, moving her past 150 in her career. She entered the game third in the ACC in shot-blocking and second in CU history.

Clemson notched the first hoop of the second frame, but a 16-2 run over the next eight minutes gave Virginia a 55-23 lead with 11:55 remaining.

Defensively, Clemson held the Cavaliers to just a 2-17 (.118) night from behind the arc, lowering their three-point field goal defense to .271 in ACC play this year.

Dixon pushed her scoring average up to 13.0 per game, as she scored in double-figures for the sixth straight game, and nailed a pair of three-pointers, dished out three assists, and nabbed two steals.

Lindsay and Dixon each played a team-high 34 minutes in the game, and Lindsay had three steals in the game to go with seven points, including her third three-point goal of the season.

For the game, the Cavs had 32 points off Clemson turnovers and had 19 second chance points while holding Clemson without a point on a second chance.

Chelsea Shine had 20 points and seven rebounds for the Cavs, who won their ninth game in the last ten against the Lady Tigers.

Clemson will head back to Tigertown and then travel to Boston College on Wednesday night for a Thursday game in Chestnut Hill, MA.