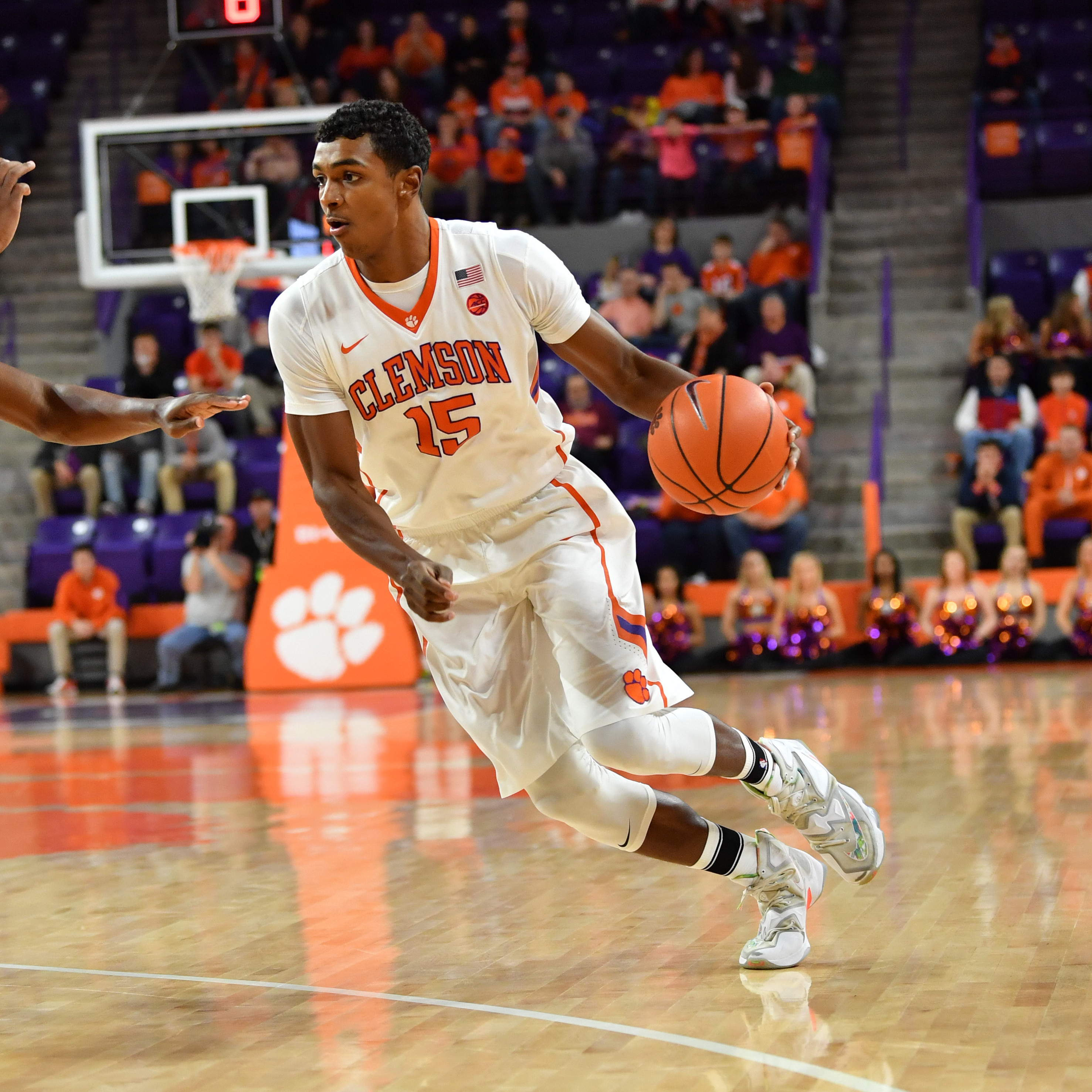 CLEMSON, S.C. — Virginia Tech shot 55 percent from the floor and missed just one free throw in 17 attempts to hand Clemson its sixth straight loss on Sunday, 82-81 at Littlejohn Coliseum. The win improved the Hokies to 15-4 on the season and 4-3 in the ACC. The Tigers fell to 11-8 overall, 1-6 in league play.

Offense was not Clemson’s problem, as three players scored at least 15 points for the Tigers. Jaron Blossomgame led the way with 20 points, his fifth 20+ point effort during the six-game stretch. Avry Holmes had 20 and Donte Grantham added 15 for the Tigers, who made 13 three-point goals, their ACC-high in a game this season.

Clemson tied the game a few times in the opening portion of the first half, one occasion that came after Shelton Mitchell was fouled on a three-pointer and hit all three to make it 17 apiece. But Tech went on a 13-5 run over the next few minutes to build an eight-point lead. Clemson later pulled within two at 36-34 on an alley-oop to Donte Grantham. He and Marcquise Reed hit two long balls in the final minute to pull the Tigers within one at intermission, 41-40.

The Tigers continued their hot outside shooting in the second half, building a 62-60 lead after a three by Grantham and slam from Blossomgame. But the Hokies answered with a 10-2 run over the next three minutes of take a 70-64 lead. Clemson, as it did all game, battled back through its offense. But after pulling within one at 70-69, the Tigers went almost four minutes without a point and Tech seized control in crunch time. Seth Allen’s clutch three-point basket with 30 seconds left ended any hope for Clemson.

The Tigers break for the next five days before taking on Pittsburgh on Saturday, Jan. 28 at Petersen Events Center. The Tigers and Panthers tip off at 12 p.m. on the ACC’s regional sports network partners.

“Just a little bit more of the same for us. I thought our team played really well offensively again…we’ve done that here at home quite a bit. We scored 81 points, shot a great percentage and had 22 assisted baskets. We made 13 threes and only had nine turnovers…just about everything you would want offensively. It felt like the Virginia game, because defensively, we aren’t getting enough stops. Again, some of that credit goes to Virginia Tech. They can really spread you out because they have four three-point shooters on the floor almost at all times. Two point guards that can really handle and make good decisions, and Chris Clarke, even though he’s not a guy who really shoots the ball, he’s a really good player who makes good decisions most of the time. It was a difficult loss, but you have to give Virginia Tech credit for making big free throws down the stretch, and Seth Allen with a huge shot in the final minute. They did just enough to win the game.”

“He struggled on some things defensively. His strength right now is offense, and we weren’t struggling offensively, especially in the second half. I thought Sidy [Djitte] gave us some good activity level defensively, both in the 1-3-1 and the man-to-man, and I thought he really helped us. I thought he was one of our better defensive players, so we kept him out there a little more.”

On Virginia Tech’s big shots down the stretch:

“Some of it is rhythm. Some of it is guys are feeling good enough about their games because of the first 30 minutes…a couple of guys have gotten into the game and are feeling really good, whether it’s Virginia’s [London] Perrantes or Seth Allen, so when it’s time for them to take and make a big shot, they’re doing it. Again, some of it is the quality of opponent. We’re playing NCAA Tournament teams almost every game. That’s hard. They’ve got guys on their team that are big shot-makers and big-time players, and when there’s some pressure to make one, they’re making them. Give their kids a lot of credit. If they miss any of those free throws down the stretch…every one of them was a 1-and-1. They weren’t two-shot fouls and they weren’t in the double bonus, and they went up to the line and were 6-for-6 in the last minute of the game. They not only hit the first one, but they also hit the second one. Give them credit for finishing the game and making big shots.”

On his team’s mentality right now:

“I really believe it’s that our players’ ‘want to’ has got to get all the way there. It’s close, and there’s a little bit of frustration, and there’s a little bit of fatigue…mental fatigue. We’re just at that point where, for the first time, we’re not quite where we need to be, both mentally and physically. The losing has probably taken a toll the last couple of weeks…it’s been hard, especially with the way it’s happened in most of the games. They’ve been a little bit gut-wrenching…four of the six have been gut-wrenching. That takes a toll on you, and that’s why you’ve got to dust yourself off and stay with it. We’re going to turn it around when my guys want to turn it around. We’re talented enough to turn it around, and we just have to understand that mistakes that we make in the seventh and 13th and 23rd and 29th and 31st minute have to be corrected, so we don’t put ourselves in a position to allow them to make a big shot to beat us.”

On if this game is a determining factor of the road games to come:

“I don’t know. I think our mentality was not conducive to even having a chance in Raleigh, and I think it is easy as a coach to justify that you did not have a full roster in Tallahassee. I think they (Florida State) may be one of the best teams in the country. Whether Khadim (Sy) played limited minutes, or Seth (Allen) didn’t even make the trip, I think it is just the coach making an excuse. Entering today, there had been 50 ACC road games and only a 30-percent winning clip. So, I don’t know if steal is the right adjective to use, I think it is more we are just incredibly grateful to win tonight. If you look at all of the numbers, whatever you want to study, it’s a push, it’s a push, and we are incredibly fortunate to win because we could just as easily have been on the other side. We are very grateful and thankful, but as it pertains to what’s left over the next six ACC road games, I don’t think this will be a predictor.”

On the mentality of the team:

“I thought it was much better. This is the first time we have played like this in my head coaching career anywhere, and I don’t know if it was the right play, and I told our team that on Sunday when we began to try to figure out what would give us our best chance against Clemson on the road; but at the premium, like any other coach would say, energy, toughness, and talk has to precede any scouting report execution. I thought that our energy, toughness and talk was much better than the previous two road games. In many respects, I thought it was much better than it was Wednesday night against Georgia Tech. I thought the togetherness and the toughness was evident from start to finish. I thought you could feel — if you know what you are paying attention to — I thought you could feel our spirit.”

On team being poised on the road:

“I thought our game at Michigan was a big win. They were beating us handily in the first half, something clicked, and we decided we wanted to try a little harder. I don’t know what it was down the stretch, but I know it was pretty good. You could say, as a part of your story, that was a part of our win; but to do it in that type of environment, against that sort of team, we needed all of them.”

On responding after falling behind:

“Yeah, I love our guys. I don’t love them because they are good players, I just love them because of who they are. I think it is easy because I get to be in front of the microphone to talk like a coach. I don’t know if that is really what it is, because the line is so thin, I don’t even know if it is visible at times. The fight and the camaraderie of your group, of your organization, has to be at an elite level just to have a chance.”