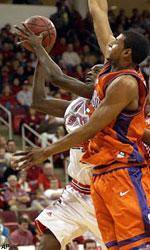 Charlottesville, VA–Virginia outscored Clemson 18-7 over the last 5:29 of the game and went on to a 61-50 victory over Clemson Tuesday night at University Hall in Charlottesville, VA. The victory improved Virginia to 12-4 overall, 2-3 in the ACC, while Clemson fell to 8-8 overall and 1-4 in the ACC.

Clemson was led by senior Chris Hobbs, who had 13 points on 6-9 field goal shooting. He was the only Clemson player in double figures. Shawan Robinson added eight points off the bench, while Olu Babalola and Sharrod Ford added seven points apiece.

The game was a defensive struggle most of the contest. The Tigers shot just 31.6 percent from the field for the game, their low percentage of the year, and made just 2-18 three-point shots. Clemson committed 23 turnovers, but forced 19.

“I don’t have a problem with the way we played defense, or with our effort in general,” said Oliver Purnell after the game. “We just have to hit more shots and improve in our ball handling on the outside

“We have a big game with Maryland on Sunday. We have three days to prepare ((after an off day on Wednesday) for Maryland’s pressure. They are outstanding in that area.”

Clemson jumped out to a 20-14 lead in the first half with 2:37 ;left on an inside score by Hobbs. But, Virginia scored the last six points of the half to tie the game at intermission. Clemson shot just 8-32 in the first half, but stayed in the game thanks to defense and rebounding. Clemson had a 25-16 rebound lead at halftime and had seven steals on defense, including a career high three by Akin Akingbala.

The strong defense by both teams continued in the second half. Virginia took an eight point lead at 43-35 with 7:15 left on a score by freshman Gary Forbes. But, Clemson responded with an 8-0 run of its own on a three-point goal by Chey Christie, a layup by Ford and a three-point goal by Robinson, whose shot with 5:29 left tied the game at 43.

But, the Cavaliers scored the next nine points behind the inside play of Minter and the outside shooting of Reynolds. Virginia made 3 of its four field goal attempts and 8-10 from the foul line inside the last five minutes, while Clemson made just 2-9 from the field and 3-7 free throws for the final five minutes.

Clemson will play host to Maryland on Sunday at 6:30 PM, a game that was originally scheduled for 8:00 PM.