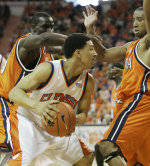 CLEMSON, S.C. (AP) -Virginia did more than surprise Clemson down the stretch – the Cavaliers shocked their coach, too.

When Virginia’s Dave Leitao talked with his team midway through the second half and down 52-41, he didn’t see much left to make a run at the 19th-ranked Tigers.

“‘We’re down 11, but it seems like 40,”‘ he remembered saying. “It didn’t look like we had the kind of energy it was going to take to come back and win the ball game.”

But there was Leitao celebrating with his players after Jason Cain’s tip-in with 15.5 seconds left capped a 16-point rally in the Cavaliers’ 64-63 victory Sunday.

“I told our guys I’m not sure if I have ever seen a game like that before,” Leitao said.

Cain’s game-winner was his only basket of the game and ended a stretch where the Cavaliers scored the game’s final 15 points.

“Last year, we wouldn’t have done this,” Cain said. “This is the first time in a long time we won two conference game on the road.”

For Clemson, it was the second straight improbable defeat. The Tigers lost at Duke 68-66 on David McClure’s layup with no time remaining this past Thursday night when officials incorrectly added time after the Clemson had tied things.

“We have to get it back together,” Clemson coach Oliver Purnell said. “This one will hurt, but we have to rejuvenate and fight on.”

Still, the Tigers looked like they were over that disappointment, moving out to a double-digit lead. Vernon Hamilton called for additional crowd noise after his 3 with 12:37 left made it 52-41.

The game seemed in the bag when Cliff Hammonds struck for his third 3-pointer to make it 61-45 with 8:47 remaining.

That’s when Virginia rallied. It started modestly with a 7-2 burst over the next four minutes that shorted Clemson’s lead to 63-52.

Things got serious when J.R. Reynolds nailed a long 3 moments later. Adrian Joseph had a 3-pointer and a short jumper and Virginia trailed 63-62 with 51.7 second to go.

K.C. Rivers stepped out of bounds on Clemson’s next possession to set up the Cavaliers winning play. Joseph’s shot missed and Cain was there to tap it back for Virginia’s first lead since the first half.

“It was a crazy play,” Clemson forward James Mays said.

Hamilton missed on the Tigers final possession and Virginia ran out the clock.

“Right now in the locker room, everybody’s got their head down, everybody’s pretty hurt,” said Mays, who had 12 points and 10 rebounds for Clemson. “But we can’t dwell on it. We’ve got a lot more we want to do.”

Reynolds led the Cavaliers with 18 points, while Singletary and Joseph had 11 each.

Hamilton topped the Tigers with 16 points.

Singletary, the ACC’s leading scorer coming in, sensed Clemson thinking they had the game won with the big lead, which fueled Virginia’s desire.

“We didn’t quit,” Singletary said. “The look on everybody’s face. It’s not unbelievable, but I haven’t seen that in the first years I’ve been here.”

The Clemson sports information office said the only other large collapse it could document was in 1967 when Virginia scored the final nine points over the last 3:54 to rally past the Tigers, 73-71, at Fike Fieldhouse.

Neither team could gain enough momentum to break away in an opening half that saw the lead change hands 11 times.

Tiger guards Hamilton and Hammonds connected near the end of the period, though, to send Clemson into the break ahead 34-30.

Hamilton hit a 3-pointer with 41 seconds left and, after a timeout, Hammonds drove around the left side of Virginia’s defense for a layup with about 6 seconds to go.

The Tigers had a much smaller time-clock problem at home. After matching technicals were handed out to Virginia’s Singletary and Clemson’s Booker, the Tigers started to inbound the ball and the shot clock reset to 35.

Before play began, though, officials reduced that to 17 seconds and the Littlejohn fans booed loudly, no doubt venting too about the Duke fiasco days earlier.