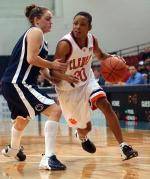 Clemson was led in scoring by Chrissy Floyd with 17. Amanda White added 14 points and Kanetra Queen added 10 for the Lady Tigers. Virginia won the battle of the boards 35-32. Clemson was led in rebounding by Tia Andrew with eight boards. Virginia improves its record to 9-11 overall, and 3-6 in league play. Clemson falls to 11-9 overall and 3-6 in the ACC. Prior to tonight’s game, Clemson had won five in a row over the Cavaliers.

Virginia scored the first six points of the second half and outscored the Lady Tigers 14-7 in the first eight minutes of play to take a 37-33 lead. Graham scored six points for the Cavaliers to propel them to the lead. Floyd hit two three pointers and Lakeia Stokes hit one from the left to bring the Lady Tigers within one of Virginia 43-42 with 8:20 left in the game. Stokes also hit two free throws to give Clemson the 44-43 advantage with 7:58 left to go in the game. White extended Clemson’s lead to 46-43 with 7:25 on the clock. Virginia went on a 17-4 surge in the next 3:32 to take a 60-50 lead with 3:41 left to go in the game. Anna Crosswhite came off the bench and scored eight points in this Virginia run. Crosswhite finished the game with 13 points.

“Crosswhite did a great job shooting the ball,” said Clemson Head Coach Jim Davis. “Those three-point baskets she made down the stretch were back breakers. Our 25 turnovers didn’t help us either. Give Virginia the credit, they took it to us in the second half. I think Virginia is like a keg of dynamite ready to explode. I think Virginia could be a lot to handle down the stretch. Look for Virginia to make some noise the second part of the season.”