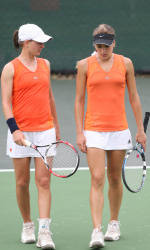 Sport: Women’s TennisYear: Sophomore/SeniorHometown: Osijek, Croatia/Sarajevo, BosniaMajor: Pre-Business/Parks, Recreation & Tourism ManagementAthletic Highlights: The doubles pair defeated the 42nd-ranked N.C. State duo in a dramatic fashion, engineering a comeback after falling behind 5-2 before rattling off seven of the next nine points to win the match. On Sunday versus Wake Forest, the #17 ranked Clemson duo found themselves behind by a significant margin again (down 7-3), before winning six straight games for a 9-7 win and to clinch the doubles point for the Tigers.