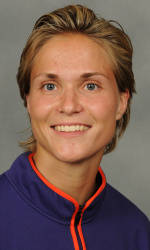 Sport: Track & FieldYear: GraduateHometown: Wangen, GermanyMajor: Health ScienceAthletic Highlights: Just one year removed from an injury that cut short her brilliant 2010 season, Weber successfully defended her conference title in the heptathlon to lead Clemson’s efforts on day two at the ACC Outdoor Track & Field Championships. Weber amassed 5,463 points in the heptathlon en route to victory. It was her first full multi-event competition in a year since suffering a torn tendon in April of 2010. She did not disappoint, winning her second straight heptathlon crown and her fifth overall ACC individual trophy in the multi-events. As if competing in eight events for the heptathlon wasn’t enough, Weber went on to earn All-ACC honors in the javelin with a runner-up finish in the event.