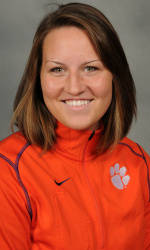 Sport: RowingYear: JuniorHometown: Greenville, SCMajor: Bio-EngineeringFavorite Professor: Fivos DrymiotisAthletic Highlights: Brown rowed in the sixth seat of the Varsity 8+ that defeated two of the best programs in the country in Columbus, OH. The 14th-ranked Tigers defeated Varsity 8+ teams from #12 Michigan and #7 Ohio State at the regatta. Clemson recorded a time of 6:44.40 while the Wolverines recorded a time of 6:47.94 in the first race of the day. The highlight of the day was the victory over Ohio State. The Buckeyes got off to a great start, but Clemson was patient, and slowly moved through Ohio State during the first 500 meters of the race. The Tigers finished the race with a time of 6:56.25, while the Buckeyes finished with a time of 6:59.60.