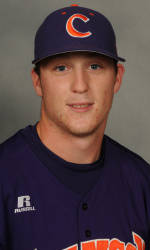 Sport: BaseballYear: JuniorHometown: South Burlington, VTMajor: Health Services AdministrationFavorite Professor: Dr. Sarah Griffin (Health Science)Favorite Class: HLTH 400 (Selected Topic in Health)Athletic Highlights: Harman was named one of four national players-of-the-week by Collegiate Baseball on March 22. He earned the honor thanks to his stellar outing in Clemson’s 3-0 win over Virginia Tech on March 19. In 7.1 innings pitched, he allowed just one hit and took a no-hitter into the sixth inning against a team that entered the game hitting .354 and averaging over nine runs per game. Harman also allowed no runs and three walks with four strikeouts to earn the victory, while he did not allow a baserunner past second base.