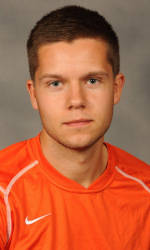 Sport: Men’s SoccerYear: FreshmanHometown: Hafnarfjordur, IcelandMajor: Pre-BusinessFavorite Professor: Jason JoynerFavorite Class: MTHSC 102Athletic Highlights: Benediktsson was named ACC Player of the Week and National Player of the Week by the National Soccer Coaches Association of America last week for his outstanding play in defeating #1 ranked Maryland. He was the first freshman to win the NSCAA honor this season. Benediktsson leads the team in scoring with seven goals and five assists on the season. He had an assist in the Tigers 2-1 win at Virginia Tech, sending a free kick into the box, which resulted in a goal.