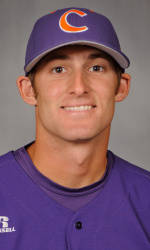 Sport: BaseballYear: JuniorHometown: Windermere, FLMajor: MarketingFavorite Professor: Candace LeuckFavorite Class: MKT 321Athletic Highlights: Miller had a remarkable week at the plate when he went 14-for-21 (.667) with two doubles, two triples (including one in the fifth inning Sunday vs. Maryland that won a John Deere tractor for a lucky Clemson fan), seven RBIs, eight runs, a .952 slugging percentage, .696 on-base percentage, two walks, and four steals in four attempts in five games this past week. He also did not commit an error in 28 chances at shortstop. He had at least two hits in all five games as well. In the three-game series against Maryland, he was 10-for-13 (.769) with two doubles, two triples, six RBIs, five runs, and two steals. He also had at least three hits and two RBIs in each of the three games against the Terrapins. He raised his batting average from .333 at the start of the week to an ACC-best .423 batting average by the end of the week. On the season, he is hitting .423 with five doubles, three triples, 17 RBIs, 23 runs, an ACC-best .545 on-base percentage, and nine stolen bases in 24 games (22 starts).