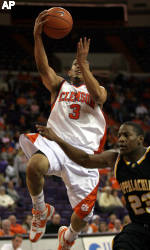 Former Clemson point guard Vernon Hamilton has conducted private workouts with two NBA franchises, the Cleveland Cavaliers and Dallas Mavericks, and hopes to soon sign a contract as an undrafted free agent. Hamilton first worked out with the Cavaliers prior to the June 28 NBA Draft, then most recently traveled to Dallas to work out for the Mavericks in early July.

Hamilton concluded his career ranked sixth in ACC history and first in school history with 271 steals. He played in 120 games as a member of the Tiger basketball program from 2003-07 and scored 1,238 total points. He also ranks in the top 10 in Clemson history in assists (399) and minutes played (3,636).

He was an honorable mention All-ACC Defensive team selection as a senior and was a first-team All-Defensive performer as a junior when he led the league in steals per game. Hamilton was invited to participate in the NABC All-Star Game following his senior season.