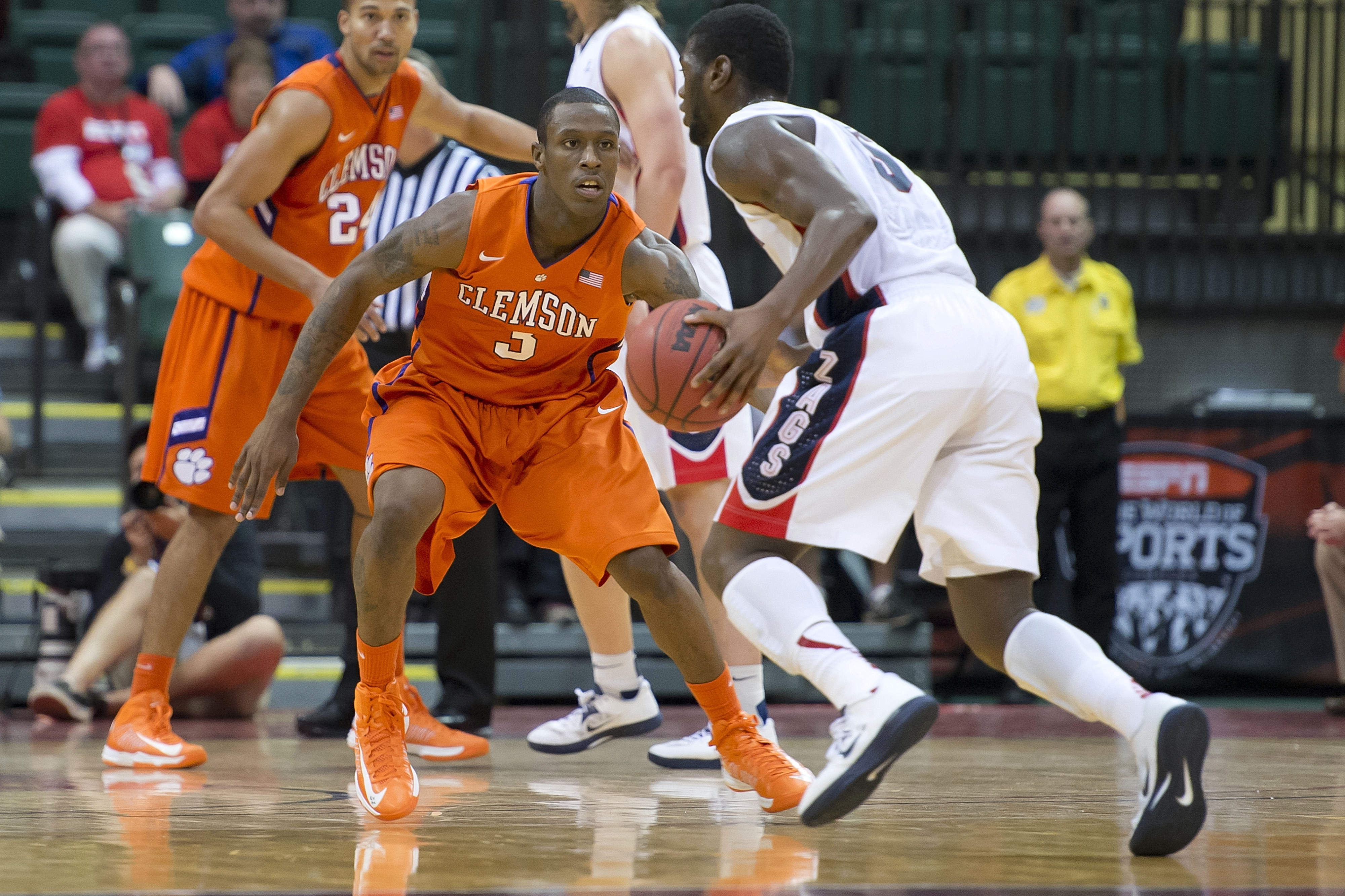 ORLANDO, FL – Clemson gave No. 16/17 Gonzaga all it could handle for most of 40 minutes on Thursday in the opening round of the Old Spice Classic, but the Zags shot 69 percent in the second half to pull away to a 57-49 victory over the Tigers. Gonzaga improved to 4-0 with the win, and advance to play Oklahoma in the winners’ bracket. The Tigers lost their first game of the season and now move on to take on UTEP for a second straight season in an exempt tournament. The game will be held at 5:30 PM Friday and will be televised by ESPN2. UTEP beat the Tigers 61-48 in Hawaii last Christmas.Clemson held Gonzaga to just 57 total points, 37 below its average coming into the game. The Tigers struggled offensively, shooting just 31 percent for the contest. The Tigers were only 27 percent from three-point range, a 6-for-22 clip. Gonzaga ended up shooting 49 percent after struggling to find the basket in the opening half. The Zags committed 13 turnovers, compared to Clemson’s eight. The Tigers have won the turnover margin all three games this season.Freshman guard Adonis Filer scored 10 points and was 4-for-12 from the field. He was Clemson’s only player in double figures. Jordan Roper and K.J. McDaniels both added eight points. Clemson seniors Devin Booker and Milton Jennings combined for just 11 points, but Jennings had eight rebounds and five assists in a solid effort. Gonzaga was led by three players in double figures, including Elias Harris and Kelly Olynyk with 13 apiece.Clemson jumped out to an early 8-5 lead after Gonzaga hit just one of its first nine field goal attempts. The Zags then scored on back-to-back possessions to take a lead before Damarcus Harrison answered with a jumpshot with about 12 minutes to go in the half. Both teams struggled to shoot the ball in the opening half, and Clemson saw starters Booker and McDaniels head to the bench with foul trouble. In stepped freshman Josh Smith and Roper, who gave Clemson valuable minutes off the bench. Smith posted back-to-back layups – his first career baskets as a Tiger – to give Clemson a 18-16 lead. Roper followed with a three-pointer to push the lead to five at 21-16. Harrison’s three moments later gave Clemson its largest lead at 24-18.Harris scored on a close shot to pull the Zags within four at 24-20, and then Olynyk finished the half strong for Gonzaga as he hit a free throw and a tip-in before the buzzer to pull his team within one at the break.Clemson came out strong in the second frame, as Jennings made a layup inside and McDaniels followed moments later with a three-pointer to give the Tigers a 30-25 lead. Gonzaga ratcheted up its offense over the next several possessions, as Olynyk heated up from the field. He scored six of Gonzaga’s first 10 points, the last of which was a 18-foot jumper to give the Zags a lead at 35-33.After Roper’s second three pulled Clemson within one at 39-38, Few’s team found Olynyk on consecutive backdoor cuts to push the lead to four again. Seconds after Filer’s floater rolled in and out, David Stockton beat the defense back down the floor to make it 43-39 in Gonzaga’s favor with 7:21 left. The lead stretched quickly to eight less than a minute later after two turnovers by the Tigers. A three-point play from Harris made it nine at 50-41 with under four to play.