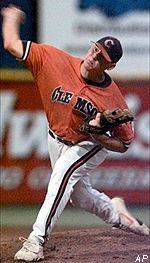 UNLV Slugs Away For 14-6 Victory Over Clemson

LAS VEGAS, NV – UNLV had 19 hits to score 14 runs in a 14-6 victory over the 10th-ranked Clemson to snap the Tigers four-game win streak Friday afternoon at UNLV’s Wilson Stadium.

Clemson mustered only 12 hits to produce six runs. Trent Kitsch, Jason Reuss and Ryan Ruiz each belted home runs for the Rebels. Brad Hertel was 3-4 with one run and one RBI and all nine UNLV starters scored.

The Tigers got the scoring started with two runs in the second inning, but the bottom half of the inning proved costly for Clemson. Clemson starter Ryan Childs lasted only 1 2/3 innings, but was tagged with the loss (0-1) after giving up six hits and five runs, four of which were unearned.

Clemson, which fell to 4-2 on the year, fought back to pull within 7-6 with three runs in the top of the fourth, but the Rebels matched Clemson’s offense in the bottom of the inning to take a 10-6 lead. UNLV scored in the second, third, fourth, fifth and sixth innings to build the 14-6 lead. Chad Coder went 3-4 and scored twice to lead Clemson’s offense.

Rebel starter Joke Gann went five innings and gave up all of Clemson’s runs off of 10 hits. He struck out four and walked two on his way to his first win of the year (1-1) as UNLV improved to 5-8.

The game concluded the two-game series between Clemson and UNLV, but the Tigers continue with one game on each Saturday and Sunday vs. Oregon State. Clemson beat the Beavers earlier in the day on Friday 9-5.