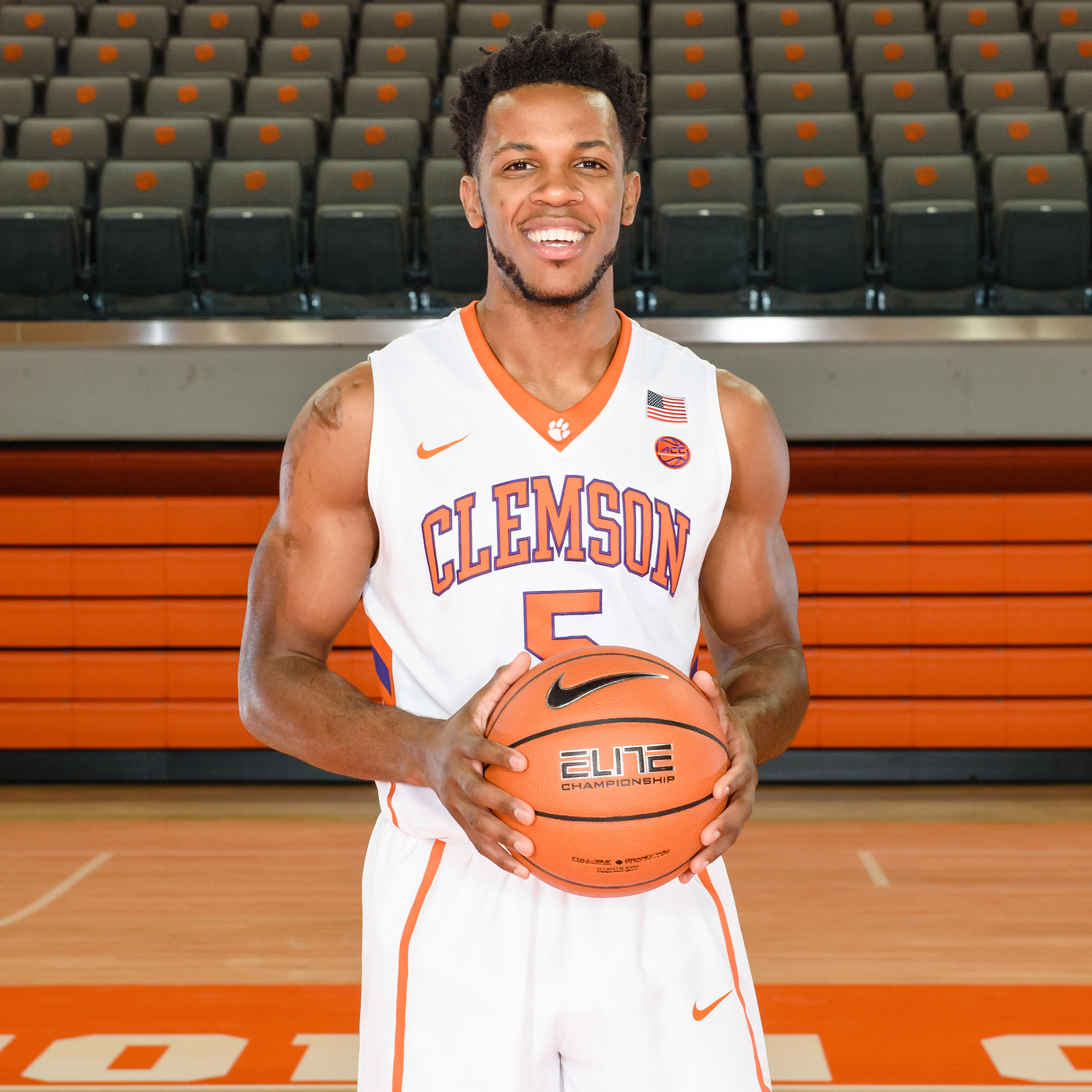 Flying back to Clemson from Phoenix after four consecutive workouts with different NBA teams this past May, Jaron Blossomgame had a decision to make. The next morning was the time that he would have to announce whether or not he was going to return to Tigertown for his senior season or officially enter the 2016 NBA draft.

“I was really going back and forth the whole week before the day that I had to decide. I got back that night and decided to sleep on it and figure it out in the morning.

“That morning, I went to coach (Brad) Brownell’s office and sat down with him and coach (Steve) Smith, and we talked it out. We agreed on some things, and I told him I was coming back. But I had no idea up until that point.”

Getting to that point had been a process, but one that Blossomgame enjoyed. During the early summer, he participated in the NBA Draft Combine in Chicago, Ill., and then seven individual “highly competitive, one-on-one, two-on-two and three-on-three workouts” with the Cleveland Cavaliers, Los Angeles Clippers, Boston Celtics, Philadelphia 76ers, Utah Jazz, San Antonio Spurs and Phoenix Suns.

“It was a fun, eye-opening experience,” remembered #5. “I learned a lot. It was hard to make my decision to come back because I played so well in my workouts with teams as well as at the Combine. It was really fun going up against some of the top guys in the country and being in that big basketball environment and seeing how things work.

“It was cool to be with those guys and be considered one of those guys. Obviously, playing well made my experience so much better, but I think I made the right decision by coming back. I felt like coming back to school was my best chance to improve my stock and hone in on what I needed to improve on.”

After electing to return for his senior campaign, Blossomgame then participated in the prestigious Nike Basketball Academy and adidas Nations in Los Angeles in July. He is excited to bring skills he learned from his summer experiences back to his team in Tigertown.

The small forward has no regrets with his decision to return for his senior season, and the special feel of the Clemson community and the people within it played a role in that choice.

“No regrets,” asserted Blossomgame of the choice to stay. “I think coming back was definitely the best decision I could’ve made. I like it a lot here. I like the relationships I’ve built with people here and my coaches and the plan that we have. I felt very comfortable coming back to school. I’m not sure I would’ve felt that way anywhere else.

“My Clemson experience has been really, really good. This place has been amazing. If I could do it all over again, I would still pick Clemson. I’ll always sit back and think, ‘What if I didn’t choose Clemson? How different would my life be?’ But I’m very happy with the decision I made.

“It’s one of the greatest universities to come play at, and the people here are just different. Coaches here actually care about you and they’ll do whatever they can to help you. You don’t get that at other universities.”

Adding to the unique atmosphere of Clemson basketball this season is the newly-renovated Littlejohn Coliseum, and Blossomgame is excited to be back at a true home court for his final season.

“Obviously, having a good home court is going to take us a long way,” he said. “We played well in Greenville last year, so we can definitely do better than that with a true home court and not having to drive 40 minutes from campus.

“In that first game, we really have to set the tone as far as playing well, having a good turnout, making sure the game is fun for the fans and keeping the students involved. It’s really important for people, especially the students, to want to keep coming out.”

Blossomgame hopes that the talent he believes the team has going into this year will propel the Tigers to success that will keep the seats full. The forward is coming off his best season statistically, starting all 31 games of the 2015-16 season and leading the team in scoring at 18.7 points per game, the third-highest figure in the ACC.

He became the first player in Clemson history to shoot at least 50 percent overall, 40 percent from behind the three-point arc and 75 percent from the free-throw line in a season while earning First-Team All-ACC honors and being the ACC’s Most Improved Player by the media and coaches. But he looks to improve even further in the 2016-17 campaign.

“As a team, our goals for this season are to win the ACC championship and make the NCAA Tournament,” stated Blossomgame. “That’s something that I haven’t done yet here.

“Individually, I want to do what I did last year…come in and play at a high level, shoot a good three-point percentage, increase my free-throw percentage and win. I think I’ve shown that I can put up big numbers here, but winning is the one thing that I have to do consistently.”

Going into his final season, Blossomgame wants winning to be part of his legacy at Clemson once he plays his last game, but he also wants for his story of going from a badly broken leg early in his career to now being squarely on NBA teams’ radars to inspire people in the community.

“I want to be seen as a guy who helped his team win…a guy who encouraged others to be the best they can be. I want to be somebody who inspires younger kids by knowing my story and knowing what I went through to be able to be where I am now…understanding that hard work can get you anywhere. You just have to persevere and beat out the people who don’t want to see you succeed. That’s the most important thing.”

But Blossomgame has one more season to cement that legacy, and in the meantime, he has some things left on the table.

“It’s unfinished business,” stated Blossomgame of his final year. “We have a lot to do. We have a talented team coming back, and we haven’t made it to the NCAA Tournament yet, so that’s something that I really want to do. In high school, I never really thought about making it to the NCAA Tournament. So when I got here, I didn’t really think it was that big of a deal. But not going at all in the five years that I’ve been here…it’s something that I want to do.

“I think this year is a year when we can do it. We’re very talented. We have the pieces and experience. I think things are different with the three new transfers. We’re more talented than we have been in the past, so there’s a lot of optimism with what we have coming back. I’m excited to get going.”