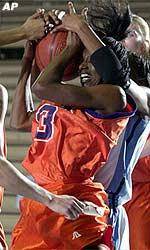 CHAPEL HILL, NC – Coretta Brown scored 18 points in leading 20th-ranked North Carolina to a 86-76 win over Clemson in an Atlantic Coast Conference women’s basketball game at Chapel Hill, NC Thursday night. North Carolina is 20-6 overall and 9-4 in the ACC. The Tar Heels are ranked 20th by the Associated Press and 22nd by USA Today. Clemson falls to 14-10 overall, 6-7 in the ACC.

Brown scored all of her 18 points with six three-point baskets. She also had five offensive rebounds and three assists on the night. Clemson was led in scoring by Chrissy Floyd with 24 points. Krystal Scott finished the game with 18 points.

In the first half, North Carolina had an early 13-11 lead with 12:20 left to go as Coretta Brown hit a three-point basket from the corner. The Tar Heels scored nine unanswered points and built an 11-point lead, 22-11, with 10:51 remaining. The Lady Tigers went on a 15-8 run and narrowed the lead to four points 30-26 with 4:55 on the clock The Lady Tigers’ Krystal Scott scored eight points in this run.

North Carolina scored the next five point and had a 35-26 advantage with 3:35 left as Kenya McBee scored from underneath. The Tar Heels did not score for the remainder of the half, and Clemson went on a 9-0 run behind Chrissy Floyd five points and took a 37-35 advantage at the half. In the first half, Clemson shot 15-29 for a .517 pct and North Carolina shot 13-32 from the field for a .406 mark.

North Carolina outscored Clemson 10-2 to start the second half and had a 45-39 lead with 16:15 left in the game. Clemson tied the score 48-48 with 13:33 left to go as Chrissy Floyd scored on a running jumper. From this point, North Carolina went on a 12-2 run and had a 60-50 lead with 7:45 left. Candace Sutton and Coretta Brown both scored six points each in this rally.

Clemson came within four points of North Carolina with 6:00 left as Chrissy Floyd hit one of two free throws. The Tar Heels went on a 12-2 run and took a 75-61 advantage with 1:48 left.

North Carolina won the battle of the boards 41-34. The Tar Heels had 18 offensive rebounds compared to Clemson’s 10. North Carolina’s Kenya McBee had seven rebounds to lead the Tar Heels. Marci Glenney, Floyd, and Scott all had five rebounds each to lead the Lady Tigers in rebounding. “I am proud of the way we fought,” said Clemson Head Coach Jim Davis. “We dug a hole and took a lead at the half. At the start of the second half, we dug another hole and we cannot not keep doing this. We need to play with more consistency. North Carolina is athletic and quick. We are thin inside and we didn’t have an answer for Candace Sutton.” Sutton had 16 points and six rebounds on the night.