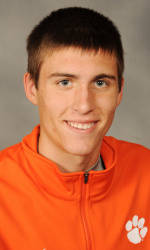 McCormack had an outstanding individual season for the Tigers in the fall. He was All-ACC after finishing eighth on Clemson’s home course, Musser Farms, at the conference championship meet in October. He then followed up with an 18th-place, all-region performance at the NCAA Southeast Regional Championships in Louisville, KY. McCormack was also individual champion at the Clemson Invitational in September.

McCormack, a native of Gainesville, GA, is majoring in language & international trade. He was a member of the All-ACC Academic Team as a freshman in 2010.