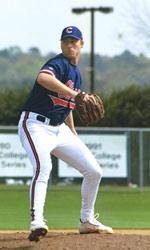 Jeff Baker and Jeff Hourigan each hit two-out, two-run homers as #1 Clemson defeated Duke 4-1 Saturday afternoon at Jack Coombs Field. Duke fell to 19-21 overall, 1-10 in the ACC while Clemson upped its record to 33-5 overall, 9-2 in the ACC.

Khalil Greene set one Clemson career record and tied another in Saturday’s game. The senior shortstop from Key West, FL picked up his 536th total base on a first inning bunt single, breaking Shane Monahan’s record. Later in the game, Greene tied the Clemson career record for hits with his 337th, tying Monahan’s record. The ACC record for hits is 366, held by former N.C. State outfielder Jake Weber.

Junior righty B.J. LaMura (4-1) picked up the win for the Tigers. He allowed one run on eight hits in 5.1 innings pitched. Senior lefty Thomas Boozer earned his second save of the season by pitching the final 3.2 innings without allowing a hit or run. Jeff Alleva (5-5) suffered the loss for the Blue Devils. Neither team was successful driving in runs, as Clemson was 1-for-11 with men in scoring position while Duke was 0-for-9. Clemson’s only hit in that situation was Greene’s bunt single, which did not plate a run. Tiger pitchers also held Duke to 0-for-7 with two outs. Clemson left 12 runners on base, while Duke left 11 men stranded.

Clemson’s four runs were thanks to homers by Baker and Hourigan. Baker’s blast came with Kyle Frank on first base and with two outs in the fifth inning. Baker hit a 1-1 breaking pitch over the left-center fence to give the Tigers a 2-0 lead. Baker’s homer was his 15th of the season, giving the junior 49 for his career. The Clemson record for homers is 53, held by Matthew LeCroy. Hourigan lined a two-out, 2-2 breaking pitch over the left-field fence in the seventh inning.

Duke’s lone run came home on Troy Caradonna’s groundout to third in the sixth inning. Caradonna actually reached base on the play on Baker’s fielding error.

The two teams will conclude the series Sunday at 1:30 at Jack Coombs Field.