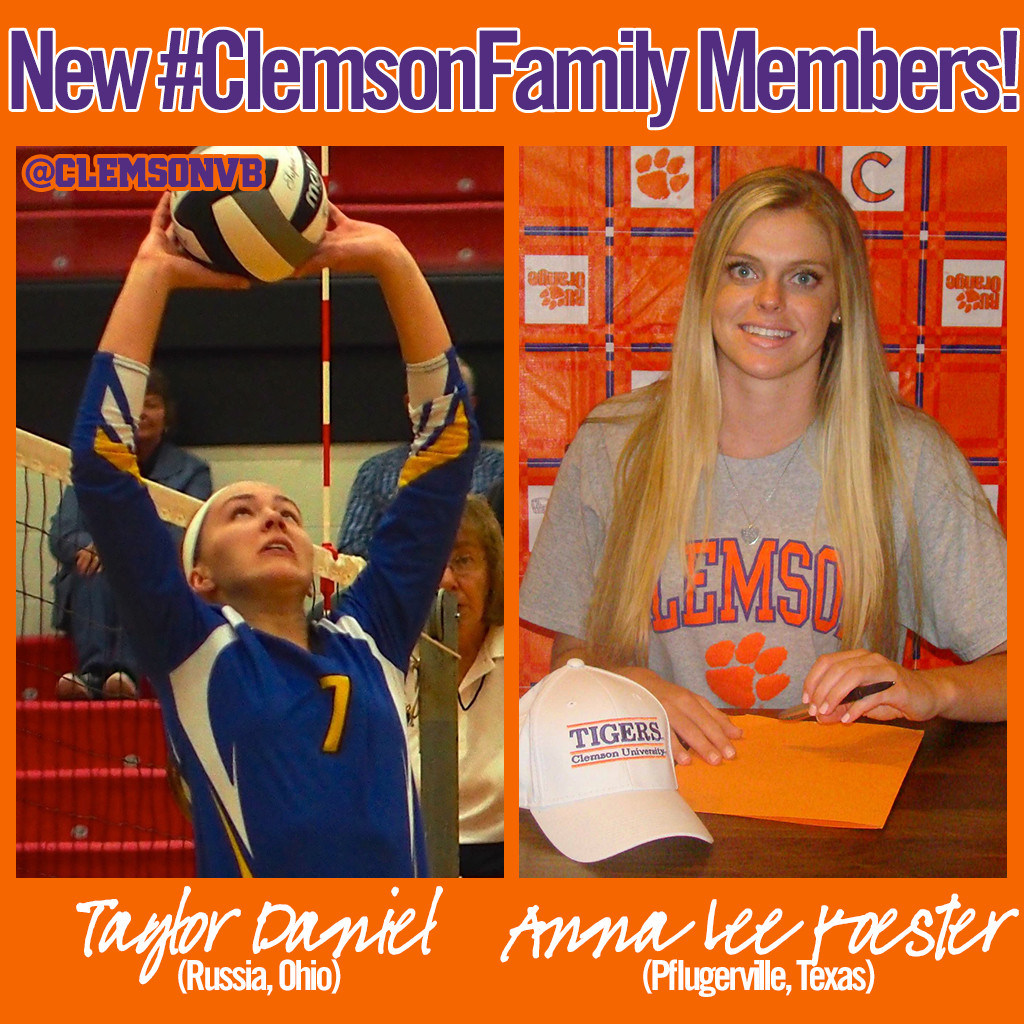 CLEMSON, S.C. – Taylor Daniel and Anna Lee Koester are the two newest signees to the Clemson volleyball Class of 2015. Head Coach Hugh Hernesman made the announcement on Wednesday afternoon. Daniel (Russia, Ohio) and Koester (Pflugerville, Texas) join seven other players that have previously signed with the Tigers for the upcoming season.

Daniel was a four-year varsity letterwinner at Russia Local School in Russia, Ohio. She was named to the Shelby County First Team and the District 9 First Team in 2014, and earned second team honors for both in 2013. Daniel was MVP of her high school team in 2014, and was a two-time team captain in 2013 and 2014. She was also an AAU Academic All-American in 2014. Daniel’s club team, Munciana Samurai, coached by Mike Lingenfelter, won the Mideast Power League in 2015 with an undefeated record. Her sister, Samantha Daniel, played volleyball at Wright State from 2011-14.

“Taylor’s experience with Munciana Samurai, one of the premier clubs in the country with one of the premier club coaches, is irreplaceable,” noted Hernesman. “Being surrounded by high-level athletes every day will, without a doubt, help her prepare for the next level. She is a very good athlete and has the size to be effective in a 5-1 offense and the ability to set the middle in system and also in more chaotic situations and off the net. Taylor is also coming to us as the valedictorian of her high school class, which is especially impressive given the three-hour round trip commute she had to make for her club practices. It shows a lot of dedication, commitment and discipline to make that work.”

Koester played for Hendrickson High School in Pflugerville, Texas, which won the District 13-6A title with a 14-0 record in 2014-15. Koester recorded 379 and a .450 hitting percentage en route to helping the team to the district title and being named to the District 13-6A First Team and earning MVP honors. Her HHS team was ranked ninth in the state of Texas and advanced to the area playoffs the same season. Koester was also a four-time academic all-district award winner in high school. Her club team, Austin Performance, earned an at-large open bid to the USA Volleyball tournament in 2014-15, and took fifth place in the Nationals Division.

“We have been watching Anna Lee play over the course of the last three club seasons and have always admired how hard she competes and the energy she brings to her team,” said Hernesman. “She is naturally strong and physical without a lot of training in the weight room, so it will be interesting to see what a structured strength, speed and agility program will do for her on the court. Anna Lee is very excited to join the Clemson Volleyball family and we’re certainly glad to have her on board.”