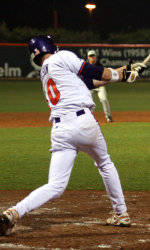 Every Tiger starter tallied a hit, as Clemson totaled 15 in the game. It was the fifth time this season the Tigers tallied 15 hits or more in a game. Clemson also went 9-for-15 with two outs, 6-for-13 with runners in scoring position, and 11-for-21 with runners on base.

Ben Paulsen was the sparkplug for the Tigers’ attack, as he went 4-for-5 with a double, two runs scored, and two RBIs. In three career games at Fluor Field, Paulsen is 9-for-13 (.692) with three doubles, one homer, seven runs scored, and seven RBIs.

Marcus Rose led off the game with a single through the left side and Connor Lind followed with a walk. Both runners moved up a base on a groundout by Bobby Hubbard. With one out, Ryan Lee drove in Rose with a groundout to second to give the Paladins a 1-0 lead.

Furman took a 3-0 lead in the third inning. Lind drew a one-out walk before scoring on Hubbard’s double down the right-field line. Hubbard then stole third base before scoring on Reese Wade’s two-out triple to right.

The Tigers tied the score 3-3 in the fourth inning. Parker led off with a single to center and advanced to third on Paulsen’s double to center. Parker was caught too far off third base, but the throw went to third base, allowing Parker to take home. With two outs, Stan Widmann drew a walk to load the bases. Sanders then hit a two-run single to center.

The Paladins regained the lead 5-3 in the fifth. Lind led off with a single through the right side and Hubbard followed with a walk. Both runners moved up a base on a groundout before Lind scored on a wild pitch. With two outs, Campbell Lewis plated Hubbard with a double to right.

Clemson scored two runs in the bottom of the inning to even the score. With two outs, Paulsen singled through the right side. Wilson Boyd then put runners on the corners with an infield single. Hogan drove in both runners with a double off the wall in left-center.

The Orange and White took the lead in the sixth inning. Widmann led off the frame with a single through the right side but was retired on a fielder’s choice by Sanders. With two outs, Schaus put runners on the corners with a single up the middle. Parker drove in both runners with a double to right-center. Paulsen then hit an RBI single to right to put the Tigers up 8-5.

The Tigers tacked on one run in the seventh inning. Boyd drew a leadoff walk before moving to third on Hogan’s single through the right side. Boyd scored on a sacrifice fly down the left-field line by Alex Lee.

Clemson took an 11-5 lead with two runs in the eighth inning. Mike Freeman hit a one-out double off the wall in left-center before scoring on a double down the left-field line by Schaus. With two outs, Paulsen drove in a run with an RBI single to left-center.

The Tigers will travel to Atlanta, GA this weekend to face #25 Georgia Tech in their final ACC series of the season. Game-one is scheduled for 7:00 PM on Friday.