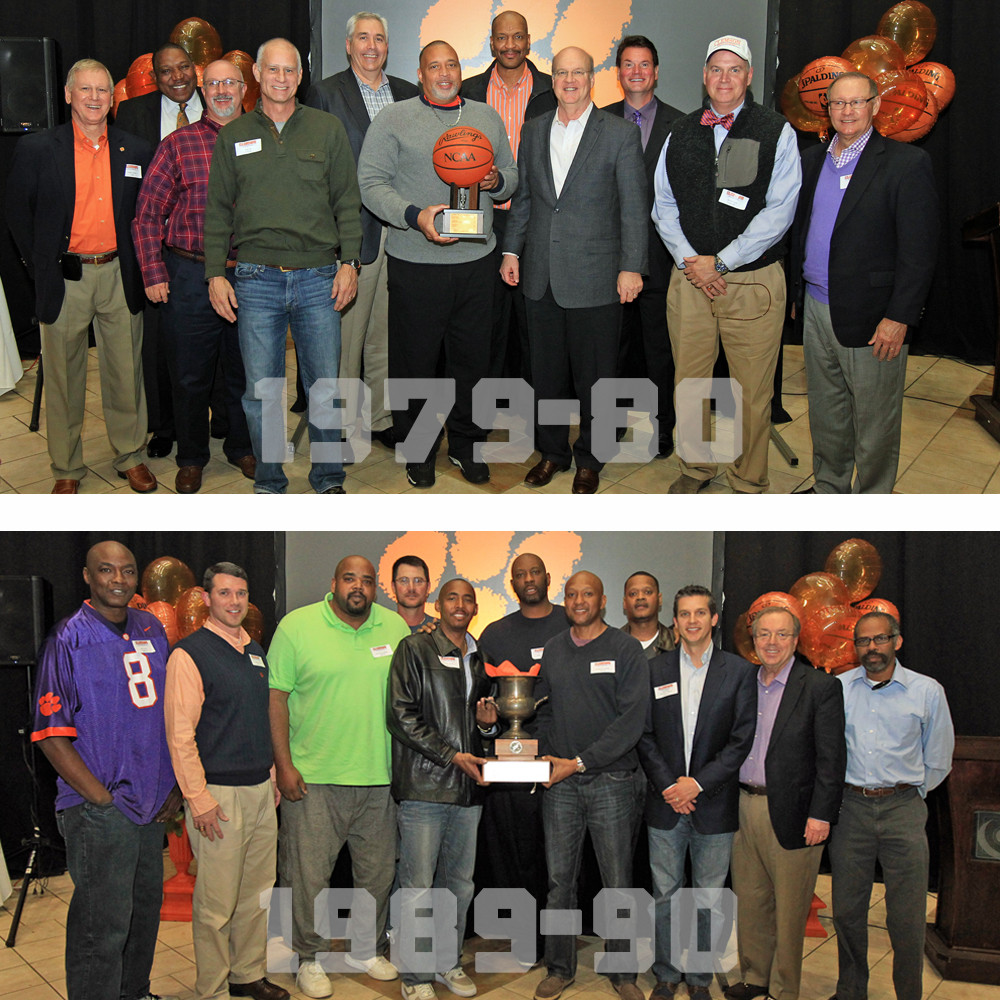 The men’s basketball program jump-started its annual alumni reunion weekend by honoring two of the greatest teams in Clemson history, the 1979-80 Elite Eight squad and the 1989-90 ACC regular season champions.

Following an hour-long fellowship around a meal catered by Aramark, assistant athletic director Tim Bourret emceed a program to celebrate the coaches, players and support staff that were on hand Friday in the concourse of Littlejohn Coliseum. Two of Clemson’s most celebrated players — first-round NBA Draft choices Elden Campbell and Larry Nance — were among the attending guests.

Bourret, who broadcast games for both teams as part of Clemson’s radio network, recounted stories and statistics as he took all alumni who were present on a journey to the past. Highlight videos that were put together by Clemson’s video staff were shown, and everyone in attendance marveled at Nance’s athletic plays and Dale Davis’ rim-rattling dunks.

After each video was presented, Bobby Conrad and Cliff Ellis took to the podium to remark about the ’80 and ’90 teams, respectively.

“It is great to see so many guys I played with, some I haven’t seen in many years,” Conrad said. “We had a coaching staff, led by the great Bill Foster, that really cared about us. We are so appreciative of being included in the family every year, and for that we thank Coach (Brad) Brownell and his assistant, Susan Ruark.”

Conrad finished strong. The point guard of the 1979-80 team, his family home in Chicago had been home to part of the net that was cut down after the Tigers beat No. 1 Duke that fateful season — one of six wins over top-25 teams. Conrad recently cleaned out the home and found the net, and at the end of his speech Friday, he donated it to Clemson Athletics as a keepsake of the program’s first win over a No. 1 team.

Ellis was a surprise last-minute visitor, as his Coastal Carolina team is in Boiling Springs, N.C. — some 90 miles away — for a critical Big South contest against Gardner-Webb at 4 p.m. Saturday. After making his way over, he shared his best recollections of each player in attendance, and even those who weren’t able to make it back for the celebration.

“The 10 years I spent at Clemson were great,” Ellis said. “I share a lot of those memories today, especially of this (’90) team. We did something special, and each of these guys made a difference in my life.”

Ellis’ team remains the only in Clemson history to win an ACC Championship in men’s basketball.