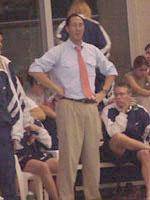 CLEMSON, SC – Head swimming and diving coach Chris Ip has announced the signing of two additional swimmers to the Clemson roster for the 2004-05 season. Patrick Raisor and Whitney Sandison will join the Tigers next year, as the team has now signed a total of eight swimmers (four men and four women) to the squad.

A Prairie Valley, KS native, Sandison was a Junior National Qualifier in the 800, 1000 and 1500m free from 2001-2003. She placed in the top three at the Central Sectional and Central Zone meets in 2002 and 2003. Sandison was a two-time Scholastic All-American and a member of the National Honor Society. She was a member of the Missouri Valley All-Star team from 1997-2001. Sandison attended Shawnee Mission East High School and swam for the Kansas City Blazers club team.