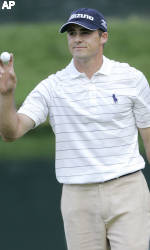 Clemson, SC – Former Clemson All-Americans Jonathan Byrd and D.J. Trahan will both compete in the 2008 Masters April 10-13 in Augusta, GA. It will be the first time Clemson has had two former players participate in the same Masters. The two players were teammates on Clemson’s 2000 team.

Both qualified by winning PGA Tour events within the last year. Byrd won the John Deere Classic last July and Trahan won the Bob Hope Chrysler Classic this past January. This will mark the seventh year in the last eight that at least one former Clemson golfer has played in the Masters.

This will be Byrd’s third Masters, the first former Clemson player to participate in three Masters. He finished eighth in his first Masters in 2003 and that is still the highest finish by a former Clemson golfer in any golf Major.

So far this year, Byrd has made seven cuts in nine PGA events and has won $531,054, good enough for 56th on the PGA Tour money list. His best finish is a tie for ninth at the Accenture Match Play Championship.

Byrd played for Clemson between 1997-2000. He was a two-time Academic All-American and two time on the course All-American during his Clemson career. He started on four Clemson teams that ranked in the final top 10 at the NCAA Tournament, the first Clemson golfer to accomplish that feat, and he was the first Clemson golfer to be named first-team All-ACC four consecutive years. He was named the IPTAY Athlete of the Year in 1998-99 and 1999-00.

Trahan will be playing in his second Masters. He played in the 2001 event as an amateur after winning the 2000 United States Public Links Championship. So far this year Trahan has played in nine events and made seven cuts. He won the Bob Hope Chrysler Classic with a 26-under-par score. So far this year he has made $1,079,388 and ranks 17th on the PGA Tour money list. He had earned $1 million by February, the earliest a Clemson golfer has won $1 on the PGA Tour. He is currently 12th on the PGA Tour in final round scoring average at 69.2, and is 13th in the FedEx Cup standings with 5,062 points.

Nine different golfers with ties to Clemson have played in the Masters over the years. The history dates to 1977 when ACC Champion D.J. Trahan are the only Tigers to play in the Masters while still a member of the Clemson golf team.

Five former Tigers have made the cut at the Masters. Jonathan Byrd was eighth in 2003. Last year, Lucas Glover finished 20th in his second career Masters.

Pruitt had a 68 in the second round in the 1992 Masters and a 69 in the final round that same year for the top two rounds for a former Tiger at the Masters. His 282 score is also the top tournament by a former Clemson golfer.