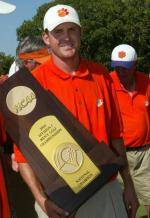 Trahan, a two-time first-team All-American at Clemson, finished second in the field of 75 golfers with a 275 score, five-under-par. Duncan finished 16th with a 281 score, one-over-par. The top 21 golfers in the field advance to the second stage.