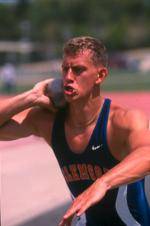 CLEMSON, SC – Two members of the 2001-2002 Clemson men’s track and field team were named to the All-Academic team by the U.S. Track Coaches Association. Rick Hill and Doug Ameigh were honored for their scholastic and athletic achievements. Qualifying student-athletes must have completed two semesters at the institution, hold at least a 3.10 cumulative GPA and have met the provisional qualifying marks for the NCAA Indoor or Outdoor Championships.

Hill, a junior from Chapel Hill, NC, boasts a 3.52 cumulative GPA and is majoring in marketing. He provisionally qualified for the NCAA Outdoor Championships in the decathlon with 7,165 points. Hill finished second in the decathlon at the ACC Championships and recorded seven season-bests at that meet. He was a member of the 2000-01 and 2001-02 Clemson and ACC Academic Honor Rolls.

Ameigh, a native of Washingtonville, PA, completed his athletic career at Clemson with a 3.33 cumulative GPA. He is completing his degree in mathematical education. Ameigh finished fourth in the high jump at the 2002 NCAA Indoor Championships to earn All-America honors, and was the ACC Indoor runner-up in the high jump. He was named a Verizon Academic All-American, and was a member of the 2000-01 and 2001-02 Clemson and ACC Academic Honor Rolls.