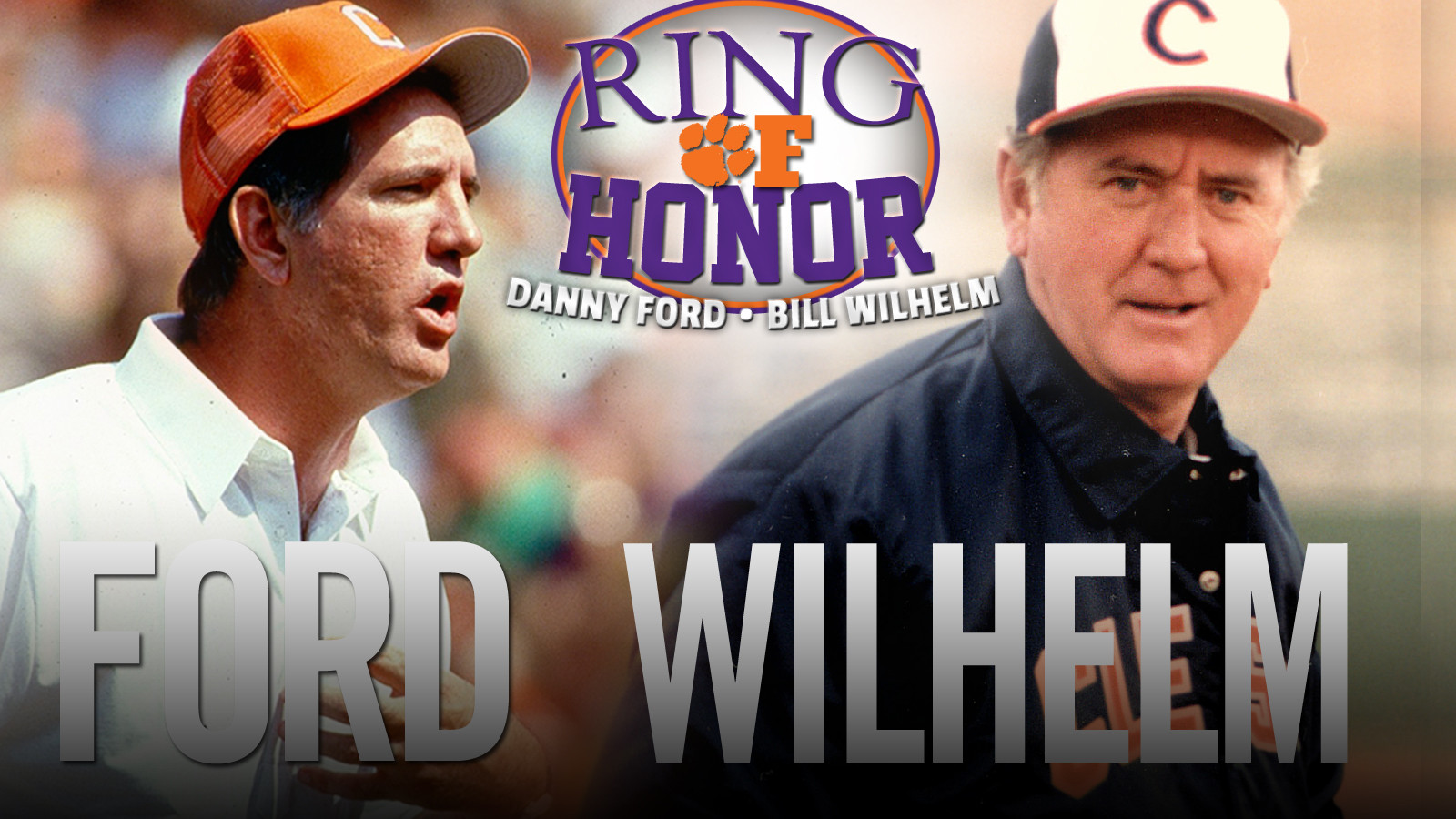 Two Clemson Coaching Legends to be Inducted into Ring of Honor

CLEMSON, SC – Legendary coaches Bill Wilhelm and Danny Ford will be inducted into the Clemson Athletics Ring of Honor this fall.  The announcement was made Friday by Ring of Honor Committee Chairman Tim Bourret. Both will be recognized at a Clemson home football game this season. Wilhelm, who will be inducted posthumously, also will be honored at a Clemson baseball game next spring.

The Ring of Honor is the highest award bestowed by the Clemson Athletic department. An inductee must be a member of the Clemson Athletic Hall of Fame, have an undergraduate degree from a four-year institution, and have made a significant impact on the heritage of Clemson athletic history.

Wilhelm and Ford combined for 16 ACC Championships, 23 top 25 seasons, and 25 postseason appearances.  Wilhelm took the Clemson baseball team to six College World Series and eight top eight finishes in final polls.  Ford coached Clemson in eight bowl games, including the 1982 Orange Bowl when he led Clemson to its most significant football victory, a 22-15 win over Nebraska that brought the Tigers program its first National Championship in any sport.

Both coaches got off to great starts to their respective Clemson careers at a very young age. Wilhelm coached Clemson to its first College World Series appearance in 1958 at the age of 29, his first season as a head coach at any level.  He took the Tigers to the College World Series again in 1959.

Neither coach had a losing season in their Clemson tenure, Wilhelm over 36 years and Ford over 11. Both guided Clemson through every season of their respective sports during the 1980s. Wilhelm won the ACC Championship and 45 games in his final year in 1993. Ford’s final team (1989) had a 10-2 record and finished 12th in the final AP poll.

Wilhelm coached Clemson for 36 years (1958-93) and finished his career with a record of 1161-536-10, a .683 winning percentage.  Twenty years after his retirement, he is still the winningest coach in ACC baseball history. He also still holds the conference mark for ACC Championships with 11 and for regular season titles with 19, a record that may never be broken. He coached Clemson to the ACC regular season or tournament championship 10 consecutive years from 1973-82.

One of the most impressive facts about Wilhelm is that he had some of his most successful teams at the end of his tenure. Each of his last seven teams were chosen for the NCAA Tournament and five of them ranked in the top 15, including his 1991 team that won an ACC record 60 games. He averaged 50 wins a year over his last seven seasons.

Wilhelm coached players flourished under his guidance and he had 97 players drafted, a figure that would have been higher had there been a draft in his first eight years as head coach (MLB draft began in 1965). Eighty-eight times his players were named first-team All-ACC and he coached 20 All-Americans.

Since his death in 2010, Wilhelm has been named to the Clemson Hall of Fame, the state of South Carolina Athletic Hall of Fame and the National College Baseball Hall of Fame.

The highlight of his career took place in 1981 when he led Clemson to a perfect 12-0 record, the only perfect season in the nation that year. Three of the wins were over top 10 teams Georgia, North Carolina and Nebraska. After that season he was named National Coach of the Year by United Press International, the Football Writers Association and the American Football Coaches Association.

Ford’s five ACC Championships rank second in Clemson football history in terms of total league titles behind the six Frank Howard accumulated in the Southern Conference and ACC between 1940-69.

Like Wilhelm, players realized significant accomplishments under Ford’s guidance.  Fifty-seven of his Clemson players went on to play in the NFL, including 11 who played on Super Bowl Championship teams. Seventy-one times his players were named first-team All-ACC and 26 of his players earned first, second or third team All-America honors.  Two of the All-Americans, Terry Kinard and Jeff Davis, are in the College Football Hall of Fame.

Wilhelm will be the second person inducted into the Clemson Baseball Ring of Honor. He will join one of his former players, three-time All-American Rusty Adkins, who played for Wilhelm from 1965-67.

Danny Ford on Induction into the Ring of Honor“I am very appreciative of this honor.   I feel a coach is less deserving of something like this than a player.  They are the ones who did all the blocking and tackling, the coaches just try to direct them and draw up the plays.

“My first thoughts on hearing this are to all the players, assistant coaches, the fans, the support staff people, the trainers and managers, the SID staff, and Jim Phillips (voice of the Tigers Ford’s entire career) who helped make us successful on the field.  If they look up in the stadium and see my name and it gives them pride for what we accomplished I am for it.

“I also want to thank the professors that were at Clemson University during my career who educated our young men.   I am just as proud of my former players who have been successful in fields outside of athletics as I am of the ones who played professional football.

“Finally, I want to thank those individuals who made this possible, including members of the Board of Trustees.

“Clemson is a special place to me and always will be. “

Ford on Coach Bill Wilhelm“I could not think of a better person to go into the Ring of Honor with than Bill Wilhelm.   When I first became the head football coach he was someone I looked to for guidance.  Everyone had so much respect for him.   He certainly helped me when I took this job at age 30.

“And I could see that respect for him wherever I went.  What a great man who had such a positive influence on so many young men over 36 years.”