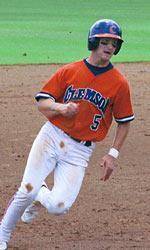 Clemson Head Baseball Coach Russell Triplett and Denny Oughton to the staff on Tuesday. Triplett will serve as the volunteer coach, and will work with infielders and hitters. He replaces Bradley LeCroy, who after spending three seasons as Clemson’s volunteer coach became an assistant coach at Western Carolina in July. Oughton will serve as the director of baseball operations, a newly-created position for the program.

“We are excited about having Russell Triplett on our coaching staff,” stated Leggett. “He was an outstanding player and loved to be on the field when he was a player. Russell understands what this program is all about, and we are looking forward to what he brings to the team.”

Triplett earned four letters with the Tigers from 2001-04. He was a two-time Second-Team All-ACC selection (2002,03) and a two-time team captain. In 222 career games, he hit .312 and had a solid .943 fielding percentage, mostly at shortstop. He was a valuable utility player on Clemson’s 2002 College World Series team and was a part of four NCAA Tournament squads.

Triplett, 24, spent the summers of 2004 and 2005 playing minor league baseball. This past summer, he played for the Hagerstown Suns (A) and Binghamton Mets (AA) in the New York Mets’ organization, where he hit a combined .286 with 15 doubles, four homers, and 25 RBIs in 61 games. A West Columbia, SC native, Triplett was born January 18, 1981.

“We are also excited to have Denny Oughton join us as well,” said Leggett. “He is a very hard worker and has baseball knowledge to go along with his great organizational skills. Denny will help a great deal in the office and improve the program in many ways.”

Oughton, 38, played shortstop and lettered twice at Pacific Lutheran in Tacoma, WA in 1993,94. Prior to his two years with the Lute program, he played two seasons at Pierce College in Tacoma.

After his playing days, Oughton was an assistant coach at his high school alma mater, Rogers High School in Puyallup, WA, for three seasons. He was later the head coach of Green River Community College in Auburn, WA and served as the head coach of the Athletes in Action Central America tour. A Puyallup native, Oughton was born March 28, 1967.