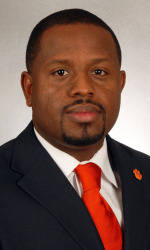 Johnson directed the women’s team to its first indoor ACC Championship since 1992, and only the school’s second indoor crown in its track & field history. His women’s program has been ranked among the nation’s top 10 the entire season, including a current No. 6 ranking heading into the NCAA Indoor Championships. Nine of his women’s athletes earned bids to compete at this weekend’s national meet in Fayetteville, AR.

Wilson earned Women’s Assistant Coach-of-the-Year honors, the first coaching accolade of his young career bestowed by the coaches association. Wilson assists with the instruction of the team’s jumpers and multi-event athletes. Three of the athletes he coaches – Patricia Mamona, April Sinkler and Liane Weber – earned bids to the NCAA Indoor Championships. Two of them, Sinkler and Weber, won individual ACC Championships two weekends ago. Wilson also coaches the pole vault. Under his tutelage, Caroline Kennedy and Amy Morrison now rank atop the school’s indoor performance list for the event.

Sinkler was named Southeast Region Field Event Athlete-of-the-Year, the second straight season a Clemson female has captured the honor. Liane Weber earned the nod last season. It has been quite a two-week period for the native of Stafford, VA. She was named the ACC’s Most Valuable Field Event Athlete after repeating as conference champion in the high jump and long jump. She has qualified for NCAAs in both events, as well as the triple jump.