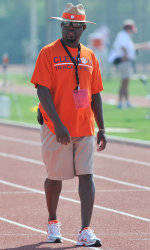 For Johnson, it was a sweep of the league’s Coach of the Year honors in women’s track & field. He was honored as the league’s Indoor Coach of the Year after guiding the women’s team to its first ACC Championship since 1992. During the outdoor season, he again led the Tiger women to first place at the conference meet. This time, competing without ACC Indoor Freshman of the Year Brianna Rollins, the women’s team won by an even greater margin (53.5 points) over its next closest competitor. It was the first ever ACC sweep of the team championships by the Clemson women’s program.

Mamona capped a brilliant 2009-10 season with the ultimate individual accomplishment, an NCAA championship in the triple jump on June 10. She hit an incredible mark of 45’11.75″ to seal the win and surpass the school record for the event. Mamona was also ACC runner-up in the triple jump, All-ACC in the heptathlon, and a scorer in the long jump as well. She has one outdoor season of eligibility remaining.

Kendrick, a native of Gastonia, NC, became the first Clemson female named the ACC’s Outdoor Freshman of the Year since Erin Nett won the inaugural honor in 1999. Kendrick was an All-American after running second leg for the Tigers’ fourth-place 4x100m relay two weeks ago in Eugene, OR. She also led the group to an ACC Championship in the event and was runner-up in both the 100m and 200m dash events. Kendrick participated in both short sprints at the NCAA Championships and established Clemson freshman records in both events as well.