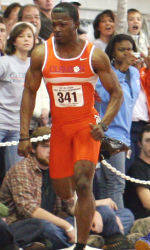 Clemson, SC – Three members of the Clemson men’s track & field team earned official bids to this year’s NCAA Indoor Track & Field Championships on Monday. The NCAA released the declaration list for the indoor national meet, and the Tigers will be represented by student-athletes C.J. Spiller.

Padgett and Spiller will both compete in the 60m dash. Padgett, a junior from Shelby, NC, is defending national champion in the event after clocking a 6.56 in last year’s final to take home his first-ever top prize. His best time this year was a 6.62 in the Clemson Opener, but he also ran a 6.63 in the 60m final en route to winning his first ACC crown in the event. Padgett is a four-time All-American, with three coming at the NCAA Outdoor Championships.

Spiller, a star on the gridiron for Tommy Bowden’s football team, will be making his first appearance at the NCAA Indoor Championships. He was an All-American last season with the 4x100m relay team. This season, Spiller’s top time of 6.58 ranks second in the nation heading into the national meet. He ran that in a win at the Carolina Classic. Spiller was runner-up in the 60m to Padgett at the ACC Championships with a time of 6.70.

Greeley comes in with the fourth-best mark in the pole vault nationally. He will be making his second appearance at the NCAA Indoor Championships. He previously earned All-America honors indoors in 2006 after finishing in a tie for eighth place. Greeley has also garnered outdoor All-America honors, and is coming off an impressive showing at the ACC Championships when he took home his second career indoor pole vault crown at the league meet. Greeley is the school record-holder indoors with an 18’1″ clearance, which he accomplished earlier this season at Virginia Tech.

The pole vault will be held Friday evening at 7:15 PM.