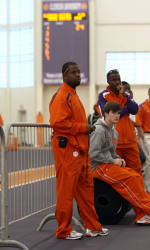 Clemson, SC – Jacoby Ford’s near-automatic NCAA qualifying time in the 60m dash highlighted day one of action at the season-opening Clemson Invitational on Friday. Ford, a two-sport athlete who completed football season with a touchdown reception in the Gator Bowl just eight days ago, ran a 6.64 Friday which is an NCAA provisional qualifying mark.

Ford was one of three provisional qualifiers in the event from Clemson. Trenton Guy matched his personal best with a time of 6.71, easily best in his heat and the second-best time overall. Justin Murdock, a freshman from Maryland, was third-best on the day with a provisional time of 6.73. The semifinals (2:10 PM) and finals (3:25 PM) of the 60m will be held Saturday.

Zach Berg was runner-up in the weight throw, as he surpassed his personal best in the event with a mark of 59’4.75″. He ranks fifth on the school’s all-time performance list in the event. Stephen White, a red-shirt freshman, was fourth at 51’6.25″.

On the women’s side, April Sinkler won the long jump with an NCAA provisional qualifying mark. She had a personal best jump of 20’0.5″ Friday and held off a pair of Alabama jumpers and teammate Patricia Mamona in the finals. Mamona jumped 19’1.25″ and finished in third place. Liane Weber was fifth with a top mark of 18’6″.

Nikola Lomnicka, a native of Slovakia, won the 20-pound weight throw in her collegiate debut for Clemson. She hit a mark of 54’9.25″ in the finals to pull out the victory.

Mamona was fifth in the 60m hurdle prelims. Known best for her ability in the jumps, Mamona clocked a time of 8.66 to lead Clemson’s efforts. Michaylin Golladay (8.83) and Weber (9.07) also qualified for Saturday’s semifinals.

Emily Barlage was runner-up in the pole vault after a clearance of 11’5.75″, which equaled her personal best in the event.