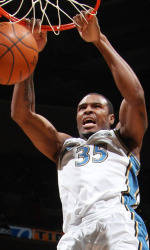 Trevor Booker to Receive Key to the City of Mauldin, SC

South Carolinian and former Clemson Tiger, NBA Rookie Trevor Booker, of the Washington Wizards, will be presented with the “Key to the City” by Mauldin, SC Mayor Don Godbey, on Thursday, June 9, at 6:30 p.m. EDT at the city’s Springfield Park basketball court. Mayor Godbey will present Booker with the key during the kickoff of his basketball tournament which Greenville-based Spinx Company has recently signed on as title sponsor for – The Trevor Booker & Josh Howard Tru-Ballers 5on5 Basketball Tournament Presented by Spinx Company. The tournament will be held through Sunday, June 12.

The Trevor Booker & Josh Howard Tru-Ballers 5on5 Basketball Tournament Presented by Spinx Company is the first event put on by Booker; it is produced in conjunction with the Josh Howard Foundation and the City of Mauldin. The tournament will showcase 15 teams from near and far – S.C., Va., D.C., Fla., Ga., N.C., and will be attended by Booker’s Washington Wizards teammates John Wall and Andray Blatche, in addition to event co-host Josh Howard. The Tournament’s winning team will receive a $5,000 prize.

The purpose of the Trevor Booker & Josh Howard Tru-Ballers 5on5 Basketball Tournament is to help raise funds for the establishment of The Trevor Booker Foundation and continuing the mission of The Josh Howard Foundation. All money generated will not be for profit, it will be used by the foundations to advance their missions.

ABOUT Trevor Booker Trevor Booker, a forward for NBA team the Washington Wizards (2010 NBA Draft 23rd Overall Pick), attended Union High School in Union, S.C. In his senior year (2005-06), Booker was named the Gatorade Player of the Year for South Carolina after averaging 21.9 points, 16.4 rebounds and 3.5 assists per game. Booker was also named the AAA state player of the year and a first-team All-State selection. Booker left Union as its career leader in rebounding and blocked shots. Booker played AAU basketball with the South Carolina Celtics.

Booker was the starting power forward at Clemson University, coached by Oliver Purnell. After four years as a Tiger he was fifth all-time at Clemson with 1,725 career points and third with 1,060 rebounds and lead the Tigers to three consecutive NCAA Tournament appearances and a school record 93 victories during his tenure. Only player in ACC history with 1,500 points, 1,000 rebounds, 200 blocks, 200 assists and 100 steals. For his efforts, Booker was named second-team All-ACC and was named to the 2009 All-Defensive Team, and was named USBWA All-District and NABC second team All-District. Booker played for Team USA in the World University Games, helping the team win a bronze medal.

ABOUT THE JOSH HOWARD FOUNDATION The Josh Howard Foundation is dedicated to helping to improve the quality of life of economically challenged communities by utilizing programs and services that focus on academic improvement, community outreach, and athletic and fitness training. It is committed to having an active role in uplifting the community. it’s innovative programs help youth to become well-rounded citizens, and enhances the quality of life of senior citizens and the community as a whole.

ABOUT SPINX COMPANY, INC. Spinx Company is based in Greenville, S.C., it owns and operates convenience retail stores in North Carolina and South Carolina, including food service locations and car washes. Spinx has been giving back to its communities for more than 35 years – it sponsors many events & organizations that improve children’s education, health, wellness and moral growth.