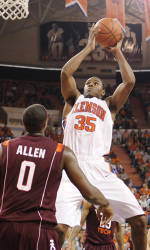 Clemson, SC – Trevor Booker is one of several college basketball standouts invited to participate in the trials for the U.S. team for the 2009 World University Games, which will be held in Serbia from July 1-12. Booker, a rising senior for Clemson, will audition for the 12-man roster at the U.S. Olympic Training Center in Colorado Springs, CO from June 16-18. The trials invitations were extended by the USA Basketball Men’s Junior National Team Committee.

Booker is bidding to become the fourth Clemson player named to a World University Games roster for Team USA. Dale Davis competed in 1989, Sharone Wright in 1993, and Greg Buckner in 1997. All three went on to lead the United States to gold medal performances.

A native of Whitmire, SC, Booker led the Tigers in scoring (15.3 ppg) and rebounding (9.7 rpg) as a junior. He was a second-team All-ACC selection after leading the conference in both field goal percentage (.571) and rebounding. He was the first ACC player to lead the league in both categories in the same season since Tim Duncan in 1997. Booker ranks in the top 10 in Clemson history in field goal percentage (.576), rebounds (792), and blocked shots (204).

Team USA will be coached by Wisconsin mentor Bo Ryan, who was an assistant coach in 1995 at the World University Games alongside current Clemson Head Coach Oliver Purnell. The two helped the U.S. to a gold medal performance in Japan.