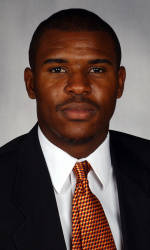 With the announcement, Booker became the first frontcourt player from Clemson to receive first-team honors since Elden Campbell and Dale Davis in 1990. Clemson’s most recent first-team honoree prior to Booker, regardless of position, was guard Edward Scott in 2003. Booker is just the third Clemson player to be named first-team All-ACC in the last 20 years.

Booker leads the Tigers (21-9, 9-7) in scoring at 15.3 points per game, and in rebounding with 8.3 per contest. It is the second straight season Booker has led Clemson in both statistical categories, and the fourth straight year he has led the Tigers in rebounding. He is also one of only three players in the ACC with at least 40 blocked shots and 40 steals. An all-around player, Booker actually led the team in assists with 42 during ACC regular season play and is second on the team overall with 75 assists.

Entering the ACC Tournament, Booker is fifth in Clemson history with 1,697 points and third with 1,041 rebounds. He is only the eighth player to currently rank in the top five of both categories at an ACC school. He is one of just six active Division I players with at least 1,500 points and 1,000 rebounds. He also stands fourth in school history with 248 blocked shots and 10th with 143 steals.

This is the third straight year Clemson has had an all-conference selection in men’s basketball. In 2007-08, K.C. Rivers was named second-team All-ACC and Cliff Hammonds was named to the third team. Last season, Booker was a second-team choice.