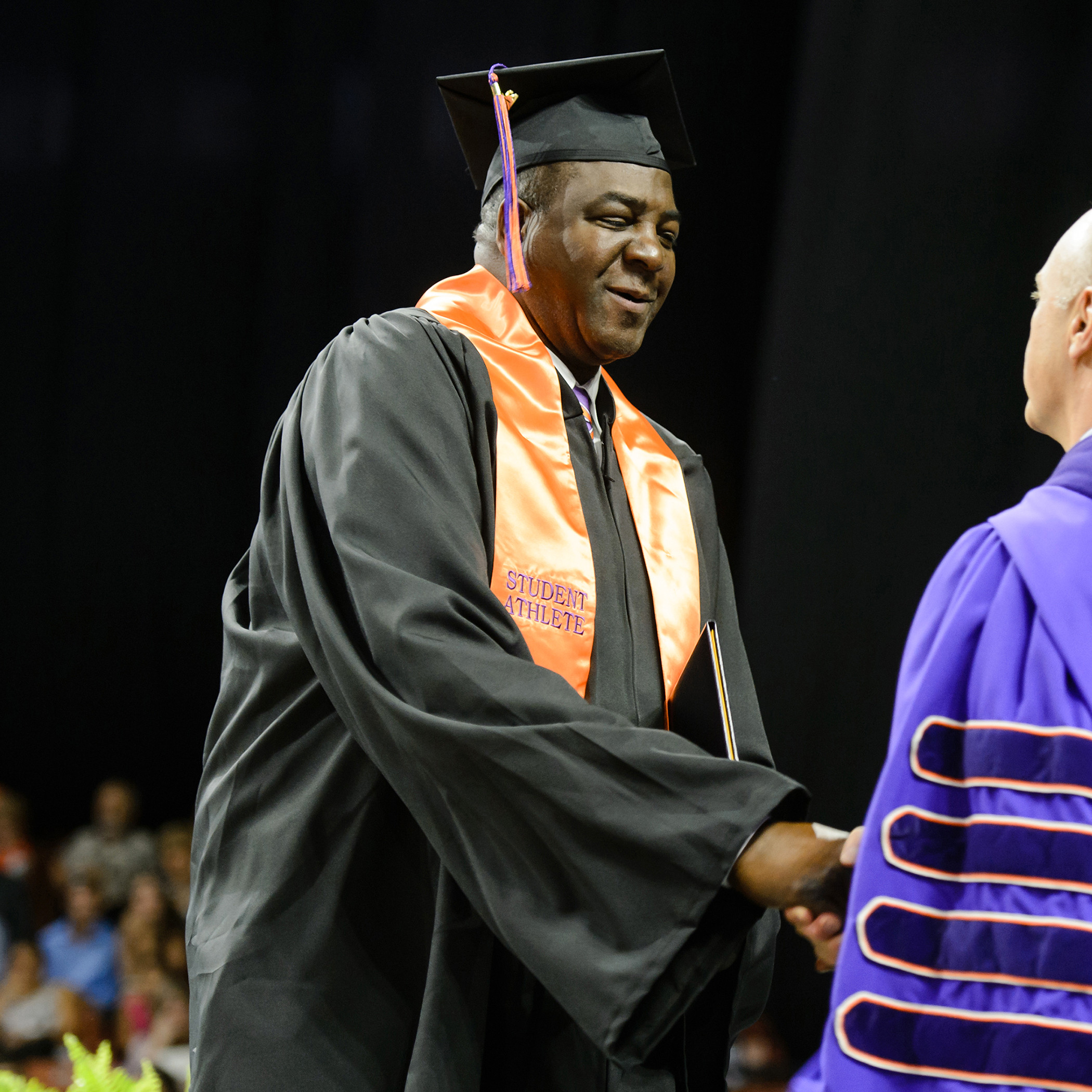 The WestZone ceremony that presents an orange “student-athlete” stole to each graduate had just ended. There was a long line of current student-athletes, parents and long-time administrators waiting patiently to speak with soon to be Clemson graduate Tree Rollins.

One of those waiting patiently was senior golfer Miller Capps, who was to receive his Clemson degree the next day and would later help the Tigers to a top-15 national ranking. Capps played his high school golf in North Carolina, but had grown up in nearby Seneca and had attended many Tiger sporting events, including basketball games in Littlejohn Coliseum.

Capps never saw Rollins play, but he knew of his legend and what he meant to the athletic program.

“I just want to have my picture taken with him,“ Capps told me with a smile.

The line of people waiting to speak with the 7’1” former center reminded me of the admiration Clemson people had for two-sport All-American Banks McFadden. When McFadden was alive and attended a sporting event, I usually arranged to have him introduced to the crowd. The response was amazing, especially considering virtually no one in the audience had seen him play.

Unfortunately, Rollins’ schedule did not allow him to throw out the first pitch at the Clemson vs. NC State baseball game that night. I believe he would have received the same type of ovation.

When I was a student at Notre Dame and before I came to Clemson for the 1977 Notre Dame football game, I really didn’t know who Steve Fuller or Jerry Butler were. But I knew all about Rollins.

He was one of the most dominant players in the nation. As a freshman in his second college game, he burst on the national scene by scoring 22 points, pulling in 20 rebounds and blocking nine shots against St. John’s. Putting up those stats against a team from New York certainly helped his brand.

“Tree Rollins put Clemson basketball on the map,” said Dwight Rainey, Bill Foster’s top assistant when Rollins was a junior and senior. Rainey and George Bennett hosted a luncheon for Rollins in Greenville just prior to his graduation at Bon Secours Wellness Arena.

In the spring before Rollins’ junior year and before the NBA draft, it was announced the Clemson program would be on probation until the end of his career. No national television and no postseason for Rollins, a tough pill to swallow even 40 years ago. But Rollins stuck with the program.

Rollins led the Tigers to an 18-win season as a junior and a then school-record 22 victories as a senior. The wins included a 20-point victory over No. 4 North Carolina that would go on to the national championship game.

Rollins was named All-ACC both seasons and had some remarkable statistics. He had four games with at least 20 points and 20 rebounds and had two triple-doubles, including one against All-American Mike Gminski (Duke). He finished with 450 career blocks. Only Ralph Sampson has more in ACC history.

On Rollins’ Senior Night, the Clemson athletic department showed its appreciation by retiring his number, the first Clemson athlete so honored. After his senior year, Rollins was the first-round selection of the Atlanta Hawks, a first in Clemson history. Six others, five of them centers, have followed suit.

A look to the accomplishments of Clemson basketball over the last 40 years indicates that it all started with Rollins. He and Horace Grant were the only Tigers to make the ACC’s 50-Year Anniversary team in 2003. But in the grand scheme of things, Rollins would have to be considered the “most important” player in Clemson history. Would Grant have come to Clemson if Rollins had not had such an impact on the program?

“In 1980, we went to the Elite Eight of the NCAA Tournament and we would not have been able to recruit the players we did to make that run if it was not for Tree Rollins and his decision to stay four years,” said Rainey. “Future runs with Horace Grant and other accomplishments by Rick Barnes’ teams trace back to Tree.”

When Rollins was a first-round draft pick of the Hawks in the early summer of 1977, he needed just a couple of classes to graduate. But the busy schedule of the NBA in the days before computers and the internet made it difficult to spare the time to come back to campus and complete those final two courses.

Rollins was an NBA mainstay. He was one of the most dominant defensive players in the league. Six times he ranked in the top three in the NBA in blocked shots, including 1982-83 when he led the league. He is still in the top 10 in NBA history in career blocks and is among the Hawks’ all-time best in career field-goal percentage. He played 18 years and over 1,000 games in the NBA.

Thanks to the persistence of Barbara Kennedy-Dixon and Wayne Coffman, who oversee the Tiger Trust Program, which supports student-athletes returning to school after their eligibility is exhausted, Rollins finished his final two courses this year.

“I can’t thank Barbara enough,” said Rollins. “She was the one who called me and got this going. She encouraged me and stayed on me to finish.”

Rollins said the major reason he stayed at Clemson for four years was to have the opportunity to get his degree.

“I made a promise to my mother that I would get my college degree,” Rollins said at the graduation reception. “My mother died four years ago, but I know she is looking down and she is proud.”

Kennedy is just as proud. The greatest player in Clemson women’s basketball history has played a big role in former Tiger athletes in all sports returning to Clemson to get their degrees. She had a big smile that entire weekend.

“I called him and told him he could get this done in a year,” said Kennedy. “He only needed a couple of classes and could do them online. I didn’t have to push him, I just encouraged him. I called him often and asked him how everything was going. He was on point and professional about it every step of the way.

“Then when we were planning the Friday luncheon, I told him I wanted him to speak. He was a little hesitant at first. But I told him, ‘these young graduates need to hear from you and know how important this is and that they are going to make it.’

“He did a great job telling his story. I was so proud of him. He sent a great message.”