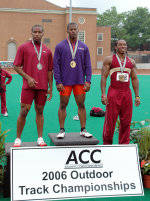 GREENSBORO, N.C. – The Atlantic Coast Conference announced today the men’s outdoor track & field accolades for the 2006 season as voted on by the league’s 12 head coaches. Coming off its second straight conference championship and fourth title in the last five years, Florida State captured a pair of honors including senior Rafeeq Curry as the Meet Most Valuable Performer and Bob Braman as Coach of the Year. Clemson’s Travis Padgett was honored as the league’s Freshman of the Year.

Curry was named Meet Most Valuable Performer after capturing individual event titles in the men’s long jump and triple jump competitions while running a leg on the Seminoles’ 4x100m relay team that finished second. Curry becomes just the seventh athlete since 1963, when the long jump and triple jump events were held at the same championship, to win both events in the same meet. Curry joins former Seminole Joe Allen as the only two athletes to win both ACC jumping events in the last 26 years. The senior from Miami, Fla., claimed the long jump competition with a mark of 25-05.25 (7.75m). He then successfully defended his title in the triple jump winning the event with a leap of 50-09.50 (15.48m). Curry wrapped up his final outdoor meet running the third leg for the Seminoles in the men’s 4x100m relay. Florida State would finish second in the race in a time of 39.89.

Padgett was tabbed ACC Freshman of the Year compiling a win in the men’s 100m dash. After running 10.40 in the preliminary round, Padgett countered with his second fastest output of the season crossing the finish line in a time of 10.35 to win his first ACC individual event title. Padgett’s victory is the 15th for the Tigers in the 100m dash, the most in league history. Clemson has claimed the 100m title six times over the last nine years. The Shelby, N.C. native also competed in the 200m dash placing 13th with a time of 21.63. This is the third time since the inception of the award in 1999 that a Clemson athlete has received this honor.

Braman was honored as the league’s Coach of the Year for the second consecutive year after guiding the Seminoles to their second straight outdoor championship. Under the tutelage of Braman, Florida State posted six individual event titles while establishing three meet records in the shot put (Garrett Johnson), 1500m (Tom Lancashire) and 3000m steeplechase (Andrew Lemoncello). Florida State, who finished third at the 2006 NCAA Indoor Track & Field Championship, is currently ranked No. 1 by Trackwire and the US Track & Field, Cross Country Coaches Association polls.