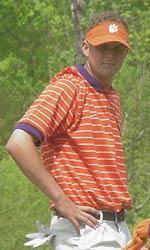 Trahan Wins First Round Match at US Amateur

Bloomfield Hills, MI – Clemson rising senior D.J. Trahan defeated Mark Gauley 2 and 1 in the first round of the United States Amateur at Oakland Hills Golf Club near Detroit. Trahan now advances to the round of 32, which will be played on Thursday.

The two players were all square after 15 holes, but Trahan won the 16th and 17th to gain the victory. No player had more than a one-hole lead until Trahan gained victory on 17. He actually trailed by a hole through 11. But, Trahan won the par 5, 561-yard 12th hole, the longest hole on the course, tie the match. He then clinched the victory with consecutive wins on 16 and 17.