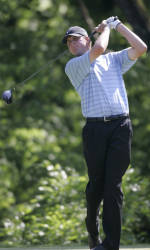 Clemson, SC – Former Clemson All-American D.J. Trahan fired a final round 65 on Sunday and won the 49th Bob Hope Chrysler Classic in Palm Springs, CA. Trahan came from four shots back over the last 10 holes to gain the victory. The 27-year-old who led Clemson to the 2003 National Championship is in just his third year on the PGA Tour.

He is now tied for third among American born PGA Tour players 30 years or younger in tournament victories. Former Clemson golfer Jonathan Byrd is second on that list with three wins, but he will fall off the ranking on Sunday (Jan. 27) when he turns 30.

Trahan’s comeback victory tied for the third best in the 49-year history of the event. David Duval came back from seven shots to win in 1999 when he had a final round 59, and Doug Sanders came from six behind to win in 1966.

“I just tried to take everything one shot at a time today,” said Trahan. “I tried to stay in the present all day and I made a few birdies. Seven-under today was a great score.

“Everyone was talking about the importance of the two-year exemption (which comes with the victory), but I was thinking that I can go back to Augusta.

“It was a big victory because it came against Justin Leonard, who is a great player. He is a Major champion and plays well with the lead.

“This is a big win. I don’t want to be looked at as just another guy out here. I want to stand out. This feels great.”

The win will qualify Trahan for his second appearance in the Masters, his first since 2001. He won the 2000 United States Public Links Championship to qualify for the Masters. It will give Clemson two former players in the 2008 Masters field. Jonathan Byrd qualified for the event when he won the 2007 John Deere Classic last year. It will be the first time ever that two former Clemson golfers have played in The Masters.

Trahan won $918,000 for his victory, the largest check in history for a former Clemson golfer in a PGA Tour event. Lucas Glover had the previous high when he won $792,000 when he captured the 2005 Funai Classic in Orlando, FL. Trahan also won a Chrysler automobile on Sunday.

Trahan entered the final round four shots behind Leonard and the lead was still four after eight holes. But, Trahan made a birdie on the ninth hole, then made birdie on the 10th when Leonard made a bogey. Trahan made a 33′ 11″ putt from off the green on the 474-yard 10th hole, just the fourth birdie by the field on that hole on Sunday.

Trahan tied for the lead when Leonard made bogey on the 11th, and took the lead with an eight-foot birdie putt on the 14th hole. Trahan had just a one-shot lead heading to the 18th tee, but made a birdie on the par five final hole, while Leonard made a bogey. Leonard had driven his ball to the right into the water, all but assuring Trahan of the victory.

The leader of Clemson’s 2003 National Championship team and 2002 National Player of the Year finished with a 26-under-par score of 334 for the event on The Classic Course in Palm Springs. Trahan finished the 90-hole event with 35 birdies, first in the field, including eight birdies on Sunday when his 65 tied for the best in the field for the final round.

Putting was the key for Trahan as he led the field in putting with an average of 26.0 per round. He had just 23 putts in the 18 holes on Sunday. He also led the field in fewest putts per round on greens in regulation with 1.585. It was just the second time in the last two years that a PGA Tour champion had led in both categories in the same event. Tiger Woods did it at The Tour Championship last year.

Trahan is the second former Clemson golfer to win more than onePGA Tour event. Jonathan Byrd has three to his credit. ClarenceRose won the 1996 Sprint International and the 1997 JC PenneyClassic, but the later event was a team event with a member of theLPGA Tour and is not considered an individual event victory.

Trahan’s victory also means a former Clemson golfer has won a PGA Tour event five consecutive years and six of the last seven. Trahan is the first former Tiger to win a Tour event within the first half of the year. All previous victories had been in events played after July 1.